A Knights of Favonius alchemist. 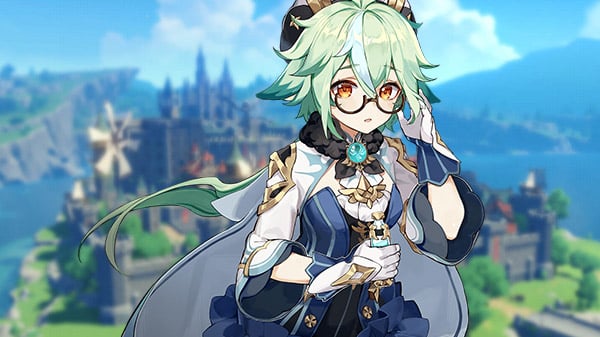 miHoYo has updated the official website for Genshin Impact with the description for Mondstadt character Sucrose.

“And this one is called… Mist Flower Project 3, Version 17, Enlargement Trial.

An alchemist with an insatiable curiosity towards the world and everything in it. Attached to the Knights of Favonius as an assistant to Albedo, her area of focus is “bio-alchemy.”

She strives to enrich the world by transforming living things with the power of alchemy.

Granted, the products of her research sometimes prove to be more weird than wonderful — but on the whole, she has made monumental contributions to the field of bio-alchemy.

“But… A life outside the lab is no life at all!” — Sucrose vehemently protesting against being forced by Albedo to take a vacation.

Avid alchemist Sucrose has numerous remarkable accomplishments to her name in the field of bio-alchemy.

Her research—or, as she puts it, “the pursuit of ultimate truth”—tends to yield all sorts of mysterious results.

Jumbo dandelions with six times the standard seed count, on account of which everyone in the city closes their windows whenever the wind picks up; wolfhooks that tear through bricks; sunsettias the size of pumpkins…

Each specimen poses great questions for Sucrose, while representing yet another milestone in her research.

But the biggest frustration of all is how to name them. For Sucrose, this is a process more agonizing than seeing her plants pilfered or contaminated during her experiments.

For instance, time seemed to surge past mercilessly like a relentless river when she was attempting to name a strain of sweet flower distinguished by its rich, sticky nectar. After expending an enormous amount of mental energy and clocking up more work hours than were spent on the artificial pollination process for the entire field, she finally came up with something passable:

Here are two GIFs of Sucrose in action:

Genshin Impact is due out for PC, iOS, and Android before October, and for PlayStation 4 in 2020. A second closed beta test will be held for PlayStation 4 on July 30. A Switch version is also planned, but a release window has yet to be determined.