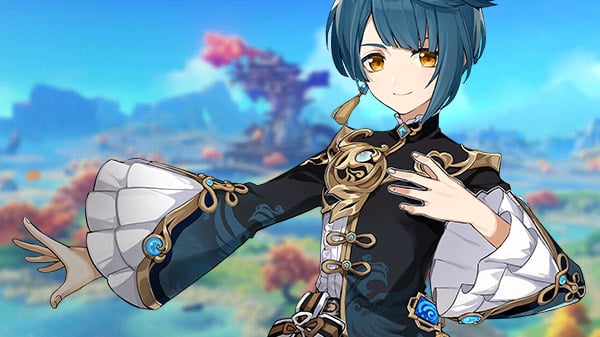 miHoYo has updated the official website for Genshin Impact with the description for Liyue Harbor character Xingqiu.

“A moment of solitude. What could be better?”

Second son of the Feiyun Commerce Guild, Xingqiu has had a reputation for being studious and polite ever since he was a young child.

But there is another side to the mild-mannered Xingqiu everyone knows. A daring, adventurous and much more mischievous side…

“Don’t be fooled by his air and graces… He’s a prankster to the core!” – Chongyun, speaking from firsthand experience.

Second son of the Feiyun Commerce Guild, Xingqiu has had a reputation for being studious and polite ever since he was a young child. Parents in Liyue Harbor would speak adoringly of him, all secretly hoping that their own children would show as much promise as Xingqiu.

But even at a young age, mild-mannered Xingqiu had a wilder side too. Unbeknownst to his father and elder brother, he would sit for hours in the classroom reading fiction, having hollowed out used textbooks and snuck martial arts novels inside. After classes, he’d go out exploring and looking for all sorts of little ways to cause mischief.

Sometimes, his antics would even end up embroiling the Feiyun Commerce Guild in controversy. Luckily for Xingqiu, he always managed avoid blame by hiding behind an insurmountable wall of eloquent filibustering. Since no-one had quite what it took to beat him in an argument, eventually people simply learned to put up with his eccentricities.

An avid reader, Xingqiu’s lifelong dream is to be the real-life embodiment of the chivalrous heroes from the pages of his books. For Xingqiu, chivalry is more than a standard of conduct — it’s a mindset. The most chivalrous of all are not deterred by setbacks, nor do they stop to indulge their sense of satisfaction when things turn out as hoped. Instead, their minds are focused at all times on seizing the next opportunity to advance the cause of compassion and justice.

Despite his young age, Xingqiu has already mastered the chivalric code and cultivated the eccentric mindset that comes along with it. This gave him a knack for the style of martial arts practiced by the Guhua Clan, and he gained some renown for effectively starting a Guhua renaissance. However, eager devotees who flock to the Guhua Clan’s gates in search of the master himself may be disappointed to hear the gatekeeper’s awkward response: “The master is off in the mountains taking some time to himself right now… Maybe try again another day.”

Here are two GIFs of Xingqiu in action: