The Tianquan of the Liyue Qixing. 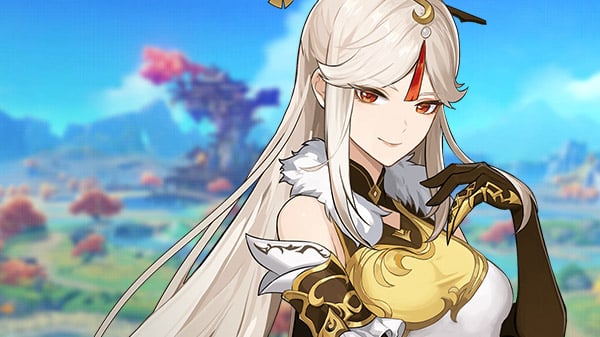 miHoYo has updated the official website for Genshin Impact with the description for Liyue Harbor character Ningguang.

“Every Mora counts, down to the very last one.”

Owner of the Jade Chamber in the skies above Liyue, there are stories abound about Ningguang, with her elegance and mysterious smile.

As the Tianquan of the Liyue Qixing, not only does she embody law and order, she also represents fortune and wit.

“The biggest secret in Liyue, is not a secret in of itself, but Ningguang, who herself knows all the secrets of Liyue.” – Kaiyang of the Liyue Qixing’s comment regarding Ningguang.

Ningguang is one of the “Liyue Qixing,” lethally perceptive and a sharp talker to boot. In the grand marketplace that is Liyue, Ningguang is second to none.

Everyone who meets Ningguang becomes awe-inspired by her exemplary insight and remarkable smarts. On top of that, her style is one of a kind.

She invested an astronomical amount into purchasing up huge volumes of Plaustrite, a type of rock with levitation properties. With this, she was able to build a resplendent residence in the sky above Liyue, known as the Jade Chamber.

Her chamber is much like Ningguang herself—beyond measure, above the masses, and draws attention from all.

Despite being a mogul who shakes the very foundations of business circles, she is adored by the children of Liyue like an older sister. A socialite at Yujing Terrace banquets and a connoisseur in the world of desserts, she remains Liyue’s most beautiful, unsolvable enigma.

Here are two GIFs of Ningguang in action:

issamepuchi ⋅ Story of Seasons: Pioneers of Olive Town announced for Switch ⋅ 2 minutes ago

issamepuchi ⋅ Story of Seasons: Pioneers of Olive Town announced for Switch ⋅ 4 minutes ago