Banisher of evil and rumors thereof. 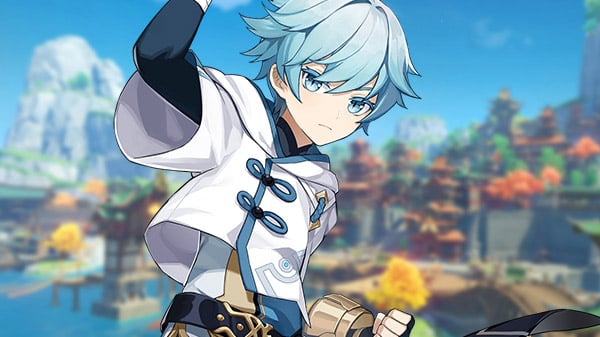 miHoYo has updated the official website for Genshin Impact with the description for Liyue Harbor character Chongyun.

“Once I have rid this world of all evil spirits, I… I will break with my abstinence, and go to the hot springs!”

An exorcist who roams the land with Liyue as his base of operations, evil spirits fleeing wherever he goes.

As the heir to a clan of exorcists, he has always possessed abilities superior to most.

However, these abilities are not the result of training, but of an inborn trait—congenital positivity.

“Want to see a different side of Chongyun? Find a way to get him into a hot spring, and you’ll see!” — Wise words from Young Master Xingqiu, who enjoys playing pranks on his friend.

With Liyue as his base of operations, the exorcist Chongyun roams the land, ridding it of evil. As the heir to a clan of exorcists, he has always possessed abilities superior to most. However, this ability is not the result of training, but of an inborn trait he has come to term, “congenital positivity.”

Congenital positivity is an exceedingly rare physiology that makes the body susceptible to heating up due to an overabundance of positive energy. If unchecked, those who possess such a form can easily become hot blooded. Chongyun is a particularly serious case, his shifts in mood are explosive, and he remembers nothing from such episodes. However, Chongyun’s condition is also his greatest asset, for all he needs to do to expel evil spirits is to sit awhile in whatever dark corner they may haunt.

As such, Chongyun’s path as an exorcist has been smooth as smooth can be. However, he himself does not approve of this manner of doing things. In his honest and upright heart, leaning on his unique physiology to exorcise evil is but a cheap trick. An exorcist must, in his estimation, perform their duties with an exorcist’s arts.

To counteract this congenital positivity, Chongyun has several disciplines that he practices. He does not go out in the sun or wear thick clothes, and he abstains from hot beverages and hot and spicy food. He takes up no quarrels, and he indulges no tempers. Yet despite searching high and low, and far and wide, he has been unable to find a lasting solution to his condition.

This troubled the young exorcist. The evil spirits were expelled, yes, but if things kept going like this, how would he ever prove himself to be a qualified exorcist?

As he sits atop an ice-capped mountain chewing on a snow bun, Chongyun cannot help but sigh. The road ahead is still long indeed.

Here are two GIFs of Chongyun in action:

Genshin Impact is due out for PlayStation 4, PC, iOS, and Android in 2020. A final closed beta test will be held in Q3 2020. A Switch version is also planned, but a release window has yet to be determined.