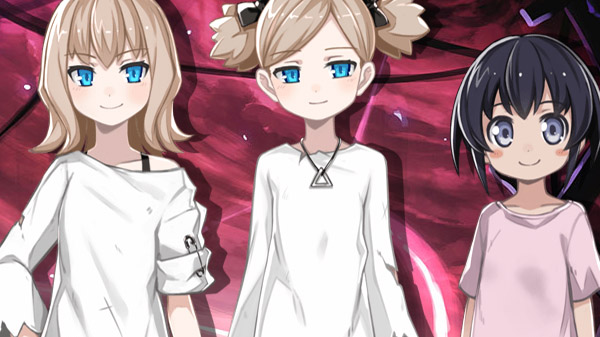 Compile Heart has updated the official website for 3D dungeon RPG Mary Skelter Finale with details on characters Reilly, Elie, and Rachel, as well as the “Blood Farm” system.

■ Characters: Survivors on the Surface

While it was just her and Elie at first, Rachel’s parents found and adopted them.

She loves Rachel’s parents dearly, and calls them mom and dad.

She is Reilly’s real little sister, but has recently been a bit jealous over Reilly’s affection for their adoptive little sister Rachel.

But she also loves Rachel, so in the end she forgives her.

She is a little too young to assess the situation, but is well protected by her adopted sisters. She loves Reilly and Elie.

You can raise Blood Flowers inside dungeons using the Blood Farm system! All you need to do is plant Blood Crystals that you gain in battle inside the dungeon. Blood Flowers will grow from the planted crystals, and can be harvested once they go into full bloom to gain various equipment and items!

You can also splatter Marchen blood over the Blood Flowers, which will give them a golden shine. These flowers have an increased chance of getting rarer, stronger equipment when harvested!

The equipment you harvest can come with special effects, like those below…

There are over one million combinations of additional effects, so keep harvesting to get the strongest weapons!

By using Hameln’s special ability, “Magnetic Piccolo,” you can harvest your Blood Flowers at once, which will trigger a special effect called “Update Chance.”
When in effect, the items you gain will gain additional bonuses!

Harvest the Blood Flowers at once to net rare items for your party!

Budgiecat ⋅ Samurai Warriors 5 launches June 24 in Japan, July 27 in the west ⋅ 4 minutes ago