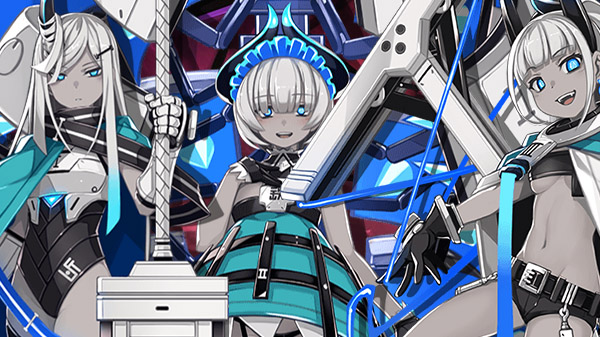 Compile Heart has updated the official website for 3D dungeon RPG Mary Skelter Finale with details on characters Guillotine, Iron Maiden, and Gallows, as well as the new “Babymares” enemy.

The leader of the Execution Girls.

She comes off as a polite person due to her well-mannered behavior and respectful language. However, inside she is cruel and inhuman, treats humans as “trash,” and has not a sliver of compassion.

One of the Execution Girls.

A girl who lives in the moment, who while obsessed with beauty also feels pleasure in destroying that beauty.

All of her actions are impulsive and thoughtless. To that extent, she is one of the cruelest among the Execution Girls.

One of the Execution Girls.

While she comes off as more descent than the other Execution Girls at first glance, she is dark and twisted on the inside.

She utilizes two personalities to look down on others, and constantly uses her cunning to figure out how to toy with them.

She also has a habit of immediately wanting someone else’s things. But she loses interest just as fast once she gets it, promptly killing it and throwing it away.

—These ominous beings are called Babymares—Nightmare babies. They appear during exploration and in battle.

Babymares are strange creatures that stick to the bodies of Blood Maidens. Blood Maidens with Babymares stuck to them may not be able to use certain commands or skills, or may suffer status ailments. The way they look and their existence in general are unpleasant.

However, these unpleasant beings can be defeated by the blood splatter of Marchen and Nightmares. And defeating can gain you benefits like a great deal of blood and improved stats to give you the upper hand in battle.

—The blood splatter icon before defeating a Babymare.

—The blood splatter icon after defeating a Babymare.

You can also drive away Babymares using Jail Roulette or Blood Bags.

Determine the Timing of a Babymare’s Appearance

Babymares will stick to the Blood Maidens based on various conditions. Be careful as they may stick to you if you get attacked by a Nightmare or caught by a dungeon trap during a Murder Hunt. They may even stick to you in battle depending on the Nightmare battle length or the Jail’s mood.