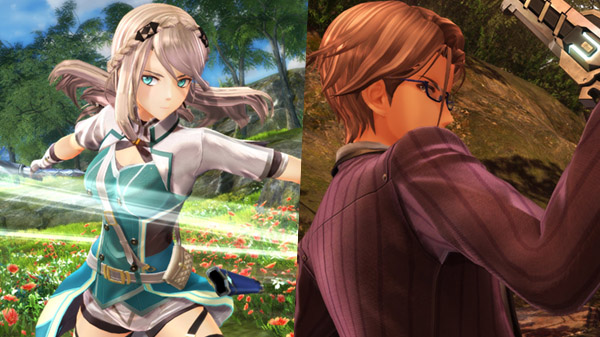 Falcom has released new information and screenshots for The Legend of Heroes: Kuro no Kiseki introducing sub characters Elaine Auclair and Rene Kincaid, as well as the L.G.C. Alignment system.

“I’m not in any position to tell you what to do anymore, but at least draw the line somewhere.”

An elite bracer and the youngest to achieve an A-rank in the Calvard Bracer Guild.

Known as the “Sword Maiden,” she is an elegant and dignified beauty with hazel blond hair that streams in the wind. She is often featured in the news in the Republic, and while she has even received offers to become a model or actress, she is persistently sticking to her path as a bracer.

She chose to become a bracer after graduating from a prestigious school, and having a fondness for traditional swordsmanship, achieved remarkable results both at home and abroad. She was granted the qualifications to become an A-rank bracer by Guild Headquarters at the young age of 23.

Then Van, her old childhood friend with whom she spent her school days, returned to the capital city Edith and started work that might cause friction with the Guild, which worried her, but…

“You don’t seem to have changed—the way you leverage that stubbornness of yours.”

An agent and assistant who works for the Integrated Analysis Office of the CID (Central Intelligence Department).

Under the supervision of his capable superiors, he has been able to handle himself well in a department divided by the president’s aim, while dealing with a vast number of matters on a daily basis, and reliably gathering information and conducting operations at the local level.

He leaves a stylish and competent impression with his well-ordered suit, which is complimented by his glasses, and has many female colleagues who admire his smooth working demeanor.

Shocked, but convinced that his childhood friend Van has started working as a Spriggan, he and Van do not hesitate to take advantage of each other’s positions.

But on the other hand, when their childhood friend Elaine decided to join the Guild in her school days, Rene was the only one to support her, and acknowledges her work as a bracer even after becoming an analyst for the CID.

Allies and adversaries change depending on the player’s actions and choices!

The Law, Gray, and Chaos values set for protagonist Van will fluctuate as you progress through the main story and quests.

Other than some of Van’s stats changing depending on these values, there will also be changes in the story’s developments and the Spriggan’s allies and adversaries from the middle of the story onward.

With a high Law value, you can fight alongside official organizations such as the Bracer Guild, but what will happen if you have high Gray or Chaos values…?

—Quests that affect your L.G.C. Alignment values will occur during the story.

—You will have to determine how to clear the quest from multiple options.

—If you choose “confess and return everything” in this instance, both the client and your companion Agnes will be satisfied.

—But if you choose “return without confessing,” Agnes may not be happy with Van’s proposal.

Changes in Allies and Adversaries

—With a high Law value, you can ask for the cooperation of the Bracer Guild, which prioritizes civilian protection.

—But if your non-Law values are high, you may be able to cooperate with those who would normally be your adversaries…

The Legend of Heroes: Kuro no Kiseki is due out for PlayStation 4 on September 30 in Japan. Read more about the game here, here, here, and here.