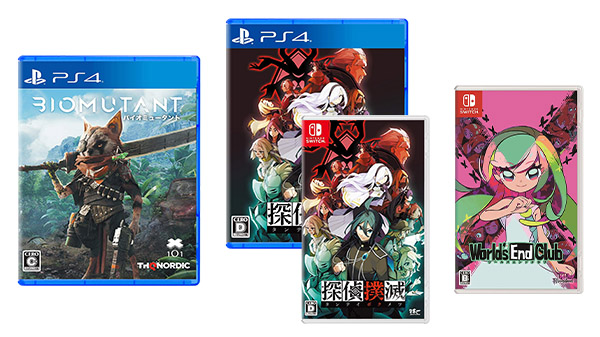 Due out worldwide, Biomutant is an open-world action RPG in which players create their own “mutant” protagonist who fights in a martial arts-styled combat that mixes melee, shooting, and mutant ability action. As a plague runs through the land and the Tree-of-Life bleeds death from its roots, the Tribes of the world stand divided. It is the player’s mission to either save the land—or lead it to an even darker destiny.

Tantei Bokumetsu is a detective adventure game from Nippon Ichi Software. It follows protagonist Wato Houjou—“The Incompetent Detective”—and 13 of the world’s best detectives as they are trapped on an island with the still-at-large serial killer known as “Yatsuzakikikou.” Their goal: to sniff out the serial killer among them. A demo for Tantei Bokumetsu is currently available for PlayStation 4 via the PlayStation Store and Switch via the Nintendo eShop in Japan.

World’s End Club is the newest game from Kazutaka Kodaka and Kotaro Uchikoshi. Currently available in an Early Access state via Apple Arcade, the Switch version of the puzzle action adventure game is the full story experience. The game follows a group of misfit students from all over Japan who find themselves trapped in a strange theme park during a class trip. While trying to unravel the mystery of their circumstances and escape, they end up involved in a “Game of Fate” that test their bonds of friendship.