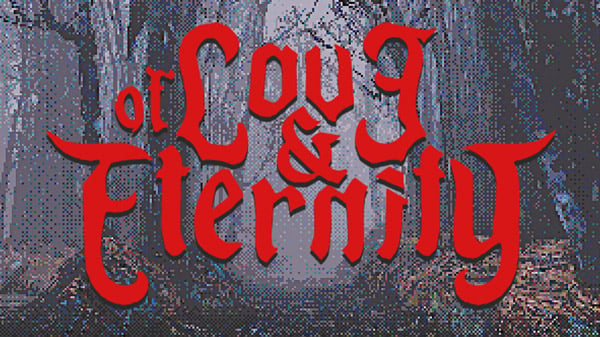 Developer Acorn Bringer has announced Of Love & Eternity, a stylistic horror adventure game about love and separation for PC, Mac, and Linux. A short demo is available now via Itch.io.

Here is an overview of the game and demo, via its Itch.io page:

Do you feel that? It is the void. It surrounds you. It crushes you as though it were the deepest darkest ocean. You feel as though you are falling from a dream. A dream with no end in sight.

It is with my sincerest regret to inform you that you are dead. Murdered in fact. Your life was taken in this most unnatural way and so your soul will wonder the void as nothing more than a lost and broken memory. Somewhere beyond this unfathomable expanse is the fractured soul of your beloved who has suffered equally so. Two parts of one soul set adrift in this impossible abyss and left to wait for the malevolent grip to loosen.

When that time comes, your souls will not pass on, but instead fall from this place to somewhere in between. A world of the damned where those who stray are lost. Where dwell violent and wicked spirits that have long been abandoned and those who wish to see you join them.

Only by reuniting with your true love may your souls become whole and ascend from that purgatory. Do you hear it? It beckons. Damnation awaits you. Both you and your beloved.

Of Love & Eternity has been a work of passion of mine for the past few years. It started as a feeling, then became a story, and now this game. While merely a short demo as of now, I hope that it conveys enough of my vision to capture people’s imagination.

This demo serves as an alpha stage or vertical slice of the game’s systems. There is still a lot to improve here but I feel that I have the bones to start adding to in the future. There are a total of ten parts planned with much of that content already created, however I want to know what people think of this first part so I can have a better sense of direction.

Watch the demo trailer below.