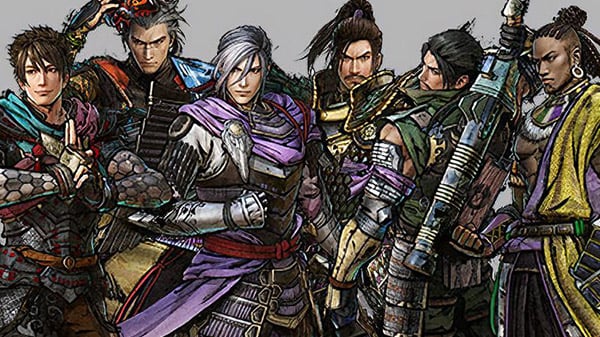 The head of the Oda family.

In order to topple the rules set forth by the turbulent era he lives in, he cast aside his compassion for his enemies and became “The Demon King.” Alongside his right-hand man Mitsuhide, he aims to reform all of Japan.

He pledges to put an end to this troubled era by working alongside Nobunaga, who has now prepared to become “The Demon King.” Like Nobunaga, Mitsuhide has also cast aside his emotions and now conducts himself in a cool and calculated manner.

Chief retainer of the Tokugawa family.

The head of the Iga Ninjas.

A friendly and laid-back ninja. After he began to work with the Oda family through Hideyoshi, he began to undertake Nobunaga’s dirty work after becoming affiliated with him. Hideyoshi looks up to him like an older brother, as their friendship goes back a long way.

The head of the Saika mercenaries.

A professional mercenary that always completes any request he undertakes. He has the ability to survive any battle or assassination attempt, and has no interest in the concept of good and evil. He has no particular loyalty to anyone.

After becoming intrigued by Nobunaga’s commanding presence, Yasuke became employed by him as a samurai. While he is from a foreign country, he has mastered the Japanese language. He is genuine in nature and firmly stands by Nobunaga, regardless of his lone wolf tendencies.

Samurai Warriors 5 will feature a total of 27 playable characters (plus the Mature versions of Nobunaga Oda and Mitsuhide Akechi), all of which were chosen based on the story.

The full list of playable characters is now fully revealed:

Watch the second official trailer and latest gameplay footage below. View a new set of screenshots at the gallery.