How does Yuffie compare to the original game? Why do people love her so much? 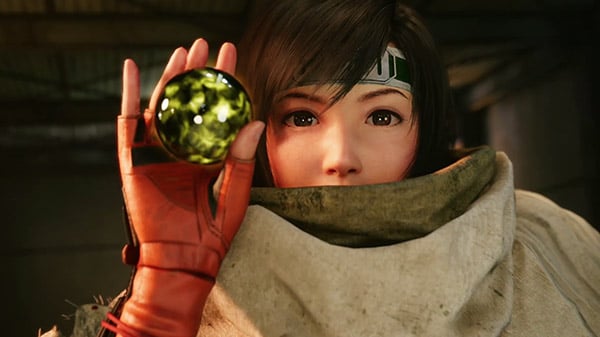 Square Enix has published an interview with Final Fantasy VII Remake co-directors Naoki Hamaguchi and Motomu Toriyama discussing the role of Yuffie Kisaragi in the new “EPISODE INTERmission” included with the remastered release.

Questions answered include: How does Yuffie compare to the original game? Why do people love her so much? Why is she wearing a moogle hood? And more.

What do you think makes Yuffie such a popular character?

Toriyama: “In the original Final Fantasy VII, Yuffie was the type of person who would appear wherever and whenever she pleased… and you’d never know whether or not she was going to join you.

“Even if she does join you, you could never let your guard down, because you didn’t know when she’d steal your materia!

“That makes her quite different from your other allies in the fight against Shinra and Sephiroth. She’s always after materia, honest about her desires, and never afraid to show that.

“It’s that combination of traits that leads to unpredictable and unexpected twists, and I think one of the reasons she’s become such a popular character.”

How does the Yuffie we meet in Final Fantasy VII Remake Intergrade “EPISODE INTERmission” differ from the original game?

Toriyama: “It’s very much the same Yuffie we all know and love that appears in Midgar.

“She’s still elusive, and still does things at her own pace, but she’s also fired up by her desire to exact revenge for her homeland of Wutai—and to execute her mission as a ninja.”

Hamaguchi: “When I think about Yuffie, the first things that come to mind are: ‘a materialistic materia hunter, who’s not comfortable or proficient with vehicles.’

“Materia is Yuffie’s motivation, and I was mindful to bring that aspect of her personality to the forefront in every part of the new episode, from the story to even the mini games.”

Oh no—does that mean she’s going to steal our stuff in the new episode too?

Toriyama: “(Laughs.) Yes, in the original Final Fantasy VII, she caused quite the hassle because she stole her allies’ materia!

“Don’t worry—in the new episode Yuffie’s the protagonist, so rest assured you don’t have to worry about your valuable materia getting taken away.”

Yuffie does sport a new look though with her moogle outfit. Why is she dressed like that in the new episode?

Toriyama: “Actually, the moogle hood draws its reference from the time it was used in Dirge of Cerberus: Final Fantasy VII, and Yuffie wears it whenever she is on a covert mission.

“She might think she’s perfectly disguised, but it actually makes her stand out even more in a metropolis like Midgar.

“I feel that’s just very ‘her’, and probably why I like it so much!”

So what can we expect from Yuffie in Final Fantasy VII Remake Intergrade “EPISODE INTERmission”?

Hamaguchi: “The new episode takes place at the same time that Cloud and company are continuing their fight in Midgar. The story follows Yuffie on her mission as a ninja operative—tasked with stealing valuable materia from Shinra.

“Our goal was to present players with a story that leads up to Yuffie’s later encounter with Cloud and his group. In addition, the new episode was an opportunity to dig deeper into the lore of Final Fantasy VII.

Final Fantasy VII Remake Intergrade is due out for PlayStation 5 on June 10 worldwide. Read more about the game here and here.