Free for users who own it on any other PlayStation platform. 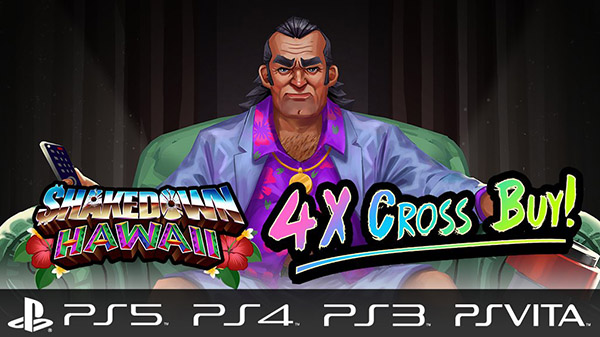 Vblank Entertainment will release Shakedown: Hawaii for PlayStation 5 on December 15, the developer announced. Users who purchased the game on PlayStation 4, PlayStation 3, or PS Vita can download the PlayStation 5 version at no additional charge.

The PlayStation 5 version of Shakedown: Hawaii includes all of the latest updates, as well as DualSense wireless controller support.

Here are the details, via Vblank Entertainment:

Shakedown: Hawaii supports the DualSense controller’s adaptive triggers, giving the weapons a more distinct feel on PlayStation 5. It also delivers a whole new level of vibration, far beyond that of the PlayStation 4 version. Whether you choose to use the triggers or opt for the twin sticks, the enhanced vibration makes sure each action has that much more of a reaction.

These new features really are awesome (if I do say so myself). Of course, if you do want to retain the more retro experience, both features can be toggled on or off independently under the options menu.

This brings an expanded trophy set to PlayStation 5, including the much-requested Platinum. The new set takes advantage of the latest enhancements, including progress trophies (which display how close you are to achieving them). Your story mode completion will also be displayed on an Activity Card, and you can use that to jump directly back into the game.

Because these new features aren’t available on all legacy platforms, the PlayStation 5 version’s trophy set and leaderboards will be separate from the PS Vita, PlayStation 3, and PlayStation 4 ones. However, this allows them to tap into the latest and greatest that PlayStation has to offer.

If you’ve already played through the original release on the previous platforms, there’s never been a better time to give it a second playthrough—especially with the new difficulty mode. Shakedown: Hawaii’s seen “The Mogul Update,” the “Full Tank Update,” the “Shake-Up Update,” not to mention the smaller updates in between.

Don’t have a PlayStation 5 yet? Not to worry! These added trophies / achievements will also be coming to the PC version. Keep an eye out for that update to roll in… and get after that new-new 100 percent!