Yuheng of the Liyue Qixing. 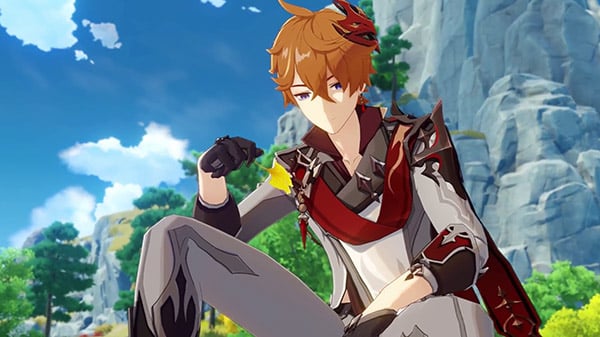 miHoYo has released gameplay and story trailers for Genshin Impact character Tartaglia, who is due out as part of the version 1.1 update on November 11.

“If your plan is to get the best of me… I’m looking forward to watching you try.”

Don’t be under any illusion as to what he might be thinking or what his intentions are. Just remember this: Behind that innocent, childlike exterior lies a finely honed instrument of war.

And here is an additional overview, via the miHoYo forums:

“One can trust him, but one ought not get too attached. He has unusual tastes when it comes to combat — the encounters he craves the most being those that bring him closest to his own demise.” – The cautious counsel of fellow Harbinger, Pulcinella.

“He cooks, he cleans… He’s the bestest big brother ever!” – The enthusiastic endorsement of younger sister, Tonia.

Warm and friendly one minute, ruthless killer the next… His shifting and unpredictable personality can leave those around him at a loss for words to describe him. But in rare, private moments, he dispenses with titles, casts off his armor and the layers of intrigue that come with it, and show his authentic self.

His name is Tartaglia, and he is devoted to the thrill and the physical feel of battle.

Don’t be under any illusion as to what he might be thinking or what his intentions are. Just remember this: Behind that innocent, childlike exterior lies a finely honed instrument of war.

Like a velvet sheath that houses an ostensibly ornamental blade, his unpredictability puts people on edge.

uk guy ⋅ The Lord of the Rings: Gollum delayed to 2022, Nacon to co-publish ⋅ 16 minutes ago
Latest Open Forum