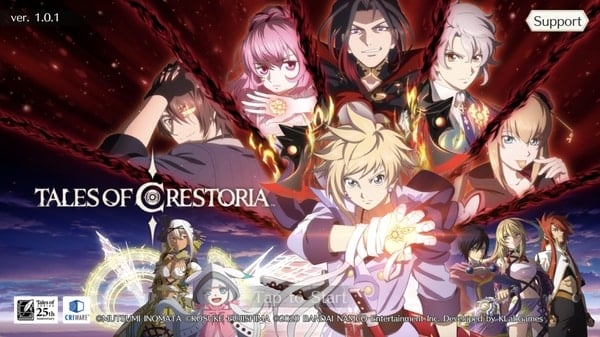 Tales of Crestoria is now available for iOS via the App Store and Android via Google Play, Bandai Namco announced.

Tales of Crestoria is a brand-new Tales adventure for mobile! Step into this epic anime RPG game set in an original Tales series world, featuring a dramatic storyline and brand new characters! Experience this anime/manga adventure as Kanata and his allies fight to survive through the fantasy world of Crestoria while bearing the weight of their past sins.

Tales of Crestoria blends classic turn-based Japanese RPG gameplay with an original and unforgettable Tales story of morality. Seen as “Transgressors” by fellow citizens for committing crimes to protect each other, Kanata and Misella set off on an epic role-playing adventure to find respite from a world that wants them erased.

Battle enemy pursuers and monsters in the fantasy world of Crestoria through simple yet intense turn-based anime RPG battle action! Combine Kanata and his allies with legendary characters from previous Tales series to form the ultimate team and help you in this anime role-playing quest!

Watch the latest set of trailers below.