Cyberpunk 2077 – robust next-gen upgrade due out in 2021, but will look better on next-gen consoles on day one [Update] 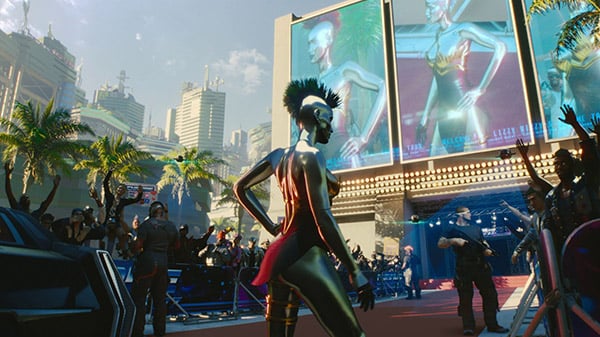 Here are the key tidbits:

Regarding Launching Near Next-Gen Consoles

“First of all, I understood your question as, ‘are we feeling good about launching next to next-gens?’ and the second part of the question was, ‘would it be more difficult for us to move out of that period to some later timing?’ I mean, I’ll start from the end. We are not considering such a scenario right now. As I mentioned, we do believe in the November date, so we’re not building any plans around anything that would mean that Cyberpunk would launch later than November 19.

“As for launching next to next gens, we’re not worried about it. This generation is different in a way from from how the move from PS3 to PS4, from X360 to Xbox one was happening back in the day in a way that there is a from start, from scratch. There is cross-gen compatibility both on PlayStation and Xbox. There is actually a hardware enhancement of the games, so for current-gen games, if there is engineering work done behind them, it will be playable, you know from the get-go, on both consoles. So in fact we look at it more as an opportunity because we’re going to be targeting both the owners of the current-gen consoles and the next-gen consoles. And we’re hoping to be the biggest, or one of the biggest, releases in that time frame, and that definitely can help because there’s going to be additional traffic and interest in video games around that time frame. That’s the perception.”

Regarding Compatibility and Upgrades on Next-Gen Consoles

“It will be running on both PlayStation 4 and PlayStation 5 from the launch date, just as it will run on the current Xbox and the next Xbox from day one.

“It will look better on the next-generation consoles from day one. The technicalities behind it are a little bit different from what [the question] described, but probably no point in going into detail about that. And I can confirm this is not the final update. At some point we’re going to have a more robust update for the for the next-gens, which we’re planning to give free of charge to anybody who purchases the PS4 or Xbox One version, but in any case you will be able to play the game on the next-gens from the 19th of November when the game releases, and it will look better than on the next-gens from that moment.

“To be honest we don’t know [when we will release the more robust update] yet, as we haven’t decided on a precise date for next-gen. We are sure that we will deliver it next year, but it was not even internally planned for a certain day, so it’s hard to say whether there is a potential delay of the next-gen.”

Regarding Delays of Potential Expansions and Multiplayer

“We haven’t specifically mentioned the number of DLCs—we prefer to call them expansions as the bigger than the typical DLCs—but of course, the fact that the launch of Cyberpunk has been moved will in proportion move the release of such potential expansions. We have not actually made any specific announcements on when that is planned, but since these are actually being developed—these are not any carved out pieces we keep in the drawer, so to say—they have to be made, they will happen later.

“Now when it comes to the multiplayer expansion, its launch is going to be proportionally delayed as well. Although multiplayer is bit more distant anyway, so that’s that’s a bit of a thing of the future anyway.”

We are happy to confirm that Cyberpunk 2077 will be backwards compatible with both next-gen consoles! Your PS4 copy of the game will work on PS5 on launch day. Anyone who buys the game on Xbox One will be able to play their copy on Xbox Series X when the console launches too!

A later upgrade to Cyberpunk 2077, taking full advantage of the next-gen hardware, will be available for free.