A new look at how battles and exploration play out. 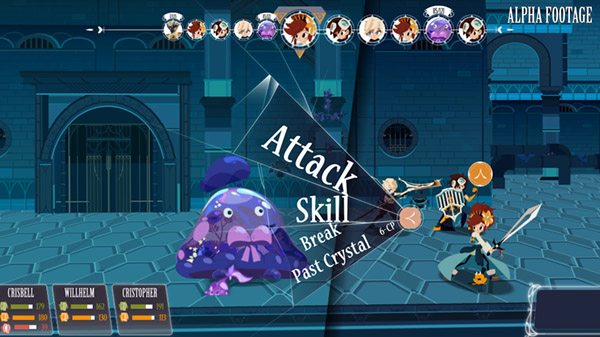 Here is an overview of the footage, via Modus Games:

Modus Games has shared a new look at how battles and exploration play out across past, present, and future simultaneously in Cris Tales, the classically inspired RPG from developers Dreams Uncorporated and SYCK.

The gameplay joins heroine Crisbelle’s party as their quest leads through the picturesque coastal kingdom of Saint Clarity, its surprisingly dangerous underbelly, and crystal-coated dungeons teeming with deadly beasts. Players can cleverly spread their influence across time to solve plights plaguing the town’s citizens and provide a better future for everyone in the breathtaking wider kingdom of Crystallis.

Experience Past, Present, and Future simultaneously in this gorgeous, indie love letter to classic JRPGs.

Cris Tales is a gorgeous, indie love letter to classic JRPGs with a new perspective. Peer into the past, act in the present, and watch as your choices dynamically change the future — all on one screen as you play! Join the newly awakened Time Mage Crisbell and her fantastical companions on their journey across a dark, fairytale world facing a grim future.

Crisbell must embark across Crystallis and the four Kingdoms in a bid to stop the powerful Time Empress and rewrite the future of the world and all those living in it. Along the way, she’ll meet and recruit powerful allies with their own unique stories and skills like Matias the Frog and Willhelm the Child Mage.

As she explores the world and meets her unique companions, Crisbell will have to make choices with far-reaching consequences for the people she meets – consequences that will impact the world you’ll experience in real-time throughout your journey. Each companion will be invaluable as you face these choices and the myriad enemies who stand in your way. Will you buffet them with attacks, or discover creative ways to use Crisbell’s time powers to alter the reality of each fight?

Beautifully hand-drawn 2D art is animated frame by frame to bring the branching pasts and futures of each region, enemy, and NPC to life across more than 20 hours of gameplay. Experience a unique combination of branching stories, innovative combat, and classic RPG excitement in Cris Tales’ exciting and unforgettable exploration of how our actions echo through time.

Cris Tales is due out for PlayStation 4, Xbox One, Switch, PC via Steam and GOG, and Stadia on November 17. PlayStation 5 and Xbox Series X versions are also in development.