The job system from Metal Max Xeno has been overhauled in Metal Max Xeno: Reborn. Spend the skill points you obtain by leveling up on skills of your choosing from five general skill trees, which include “Drive,” “Repair,” “Medical,” “Militia,” and “Survive.” Skill trees also have several character-specific skills. Freely develop your characters based on party composition and vehicle. 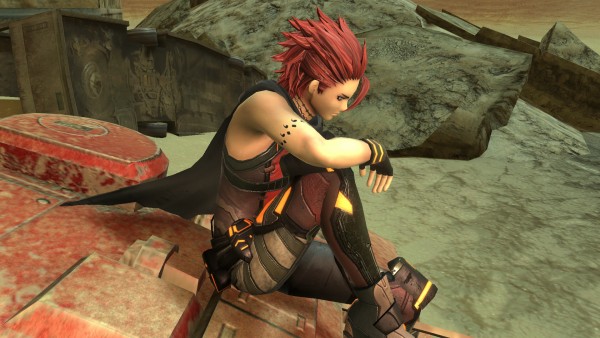 The protagonist Talis has a mechanical left arm. His arrival in Dystokio reactivates the gears of fate for the few survivors and the endangered human species in the region.

In addition to a complete “Drive” skill tree, Talis also has a unique skill tree called “Neph-Tech,” which is not available for other characters.

—The “Drive” skill tree is dedicated to vehicle driving and operation ability. Talis has the unique skills “Babel Blast” and “Illusion Drive.” 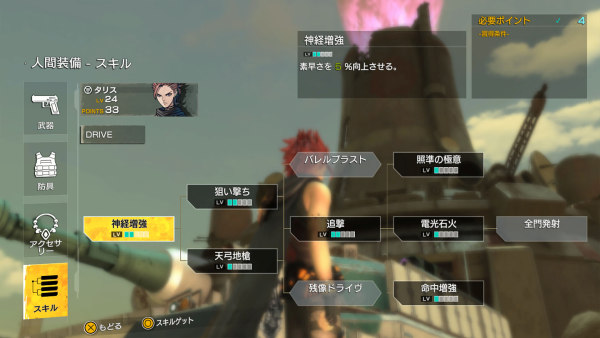 —“Revenge Hellfire” is a skill from the “Neph-Tech” skill tree activated from Talis’ mechanical left arm. Through technology still unknown to man, his left arm transforms and fires a powerful flame-attribute blow. 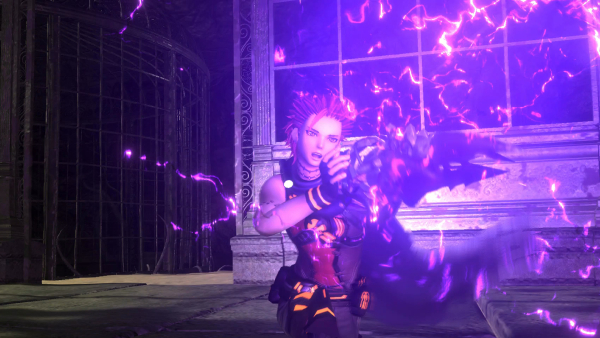 —“All Cannons Fire,” a skill that can simultaneously fire all weapons equipped to the tank, is the highest rank skill on the “Drive” skill tree. It is a crucial skill to have in battles against powerful monsters such as Wanted Monsters. 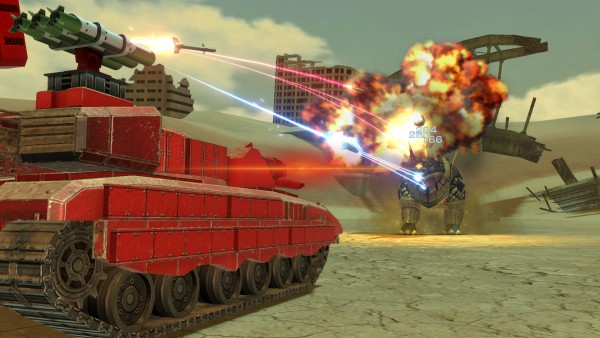 A young man who was taken in by the Iron Base as an orphan from an early age. Under the influence of Jingoro, the engineer who raised him, he developed a natural talent for tinkering with machines. He fell in love with Toni at first sight, who he saw in the town that was once adjacent to the Iron Base. 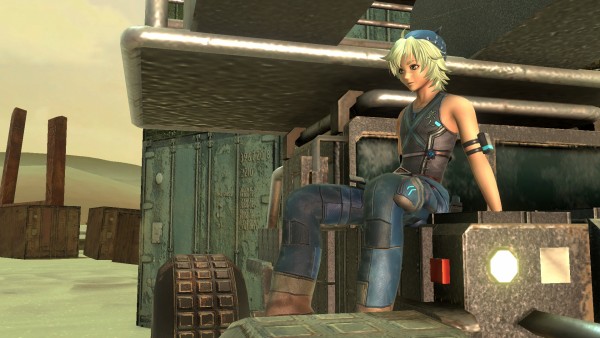 Yokky has additional skills centered on the “Repair” skill tree that utilize his talent for tinkering with machines.

—The “Repair” skill tree is dedicated to the repair and strengthening of vehicles as an engineer. Yokky has the unique skills “Damage Repair” and “Wreck Repair.” 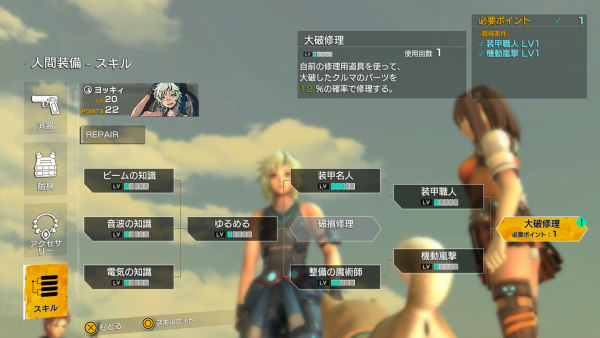 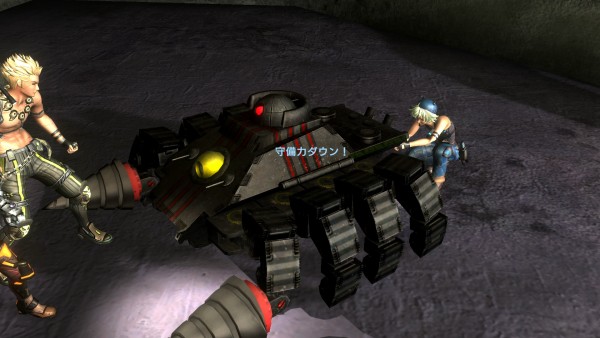 A girl who came to Iron Town from her hometown with her father for an unknown reason. After the invasion of the new-type monsters “SoNs (Sons of NOA),” the haven she had finally procured was lost. She is a cute-looking girl with a fiery determination. 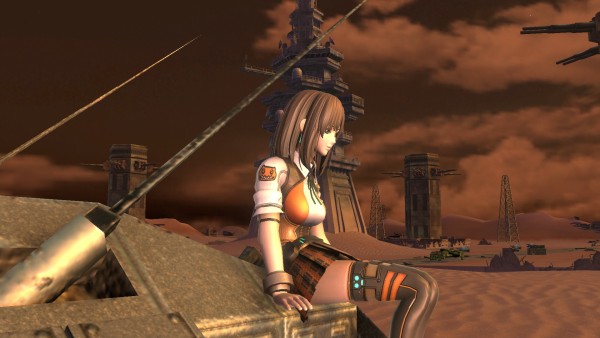 Toni has additional skills based on the “Survive” skill tree to assess the survival of both herself and her friends.

—The “Survive” skill tree is dedicated to survival ability, with effects exhibited both in battle and on the field. Toni has the unique skill “Smoke Bomb.” 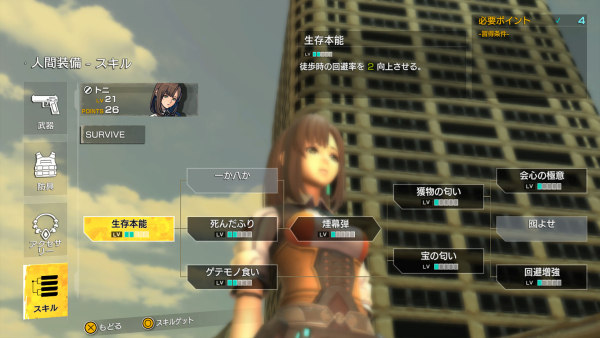 —Even while her party fights to the death, Toni can withstand enemies with “Play Dead” whenever she finds herself in trouble. This is a basic “Survive” skill that comes out through danger and discord. Just like actual death, not only does it fool monsters, it may even fool the player if they did were not aware. 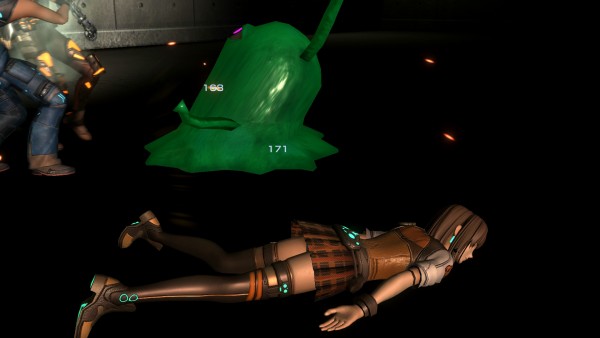 The leader of a gang that terrorized the area around Iron Town. He dearly misses the friends that he lost, and is not a bad guy at heart. He swears revenge against the monsters that killed his friends. 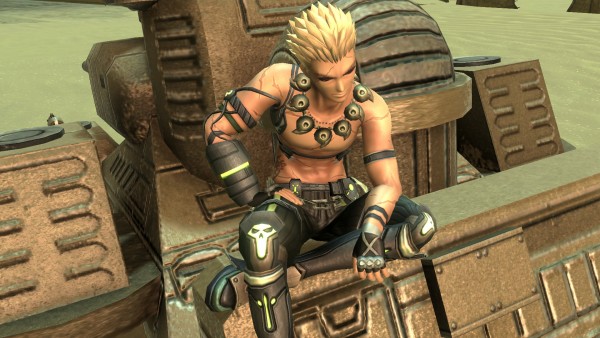 Dylan has additional skills based on the “Militia” skill tree, which are both wild and extravagent.

—The “Militia” skill tree is dedicated to abilities mainly active in human battles. Dylan has the unique skills “Roar of the Beast” and “Steal.” 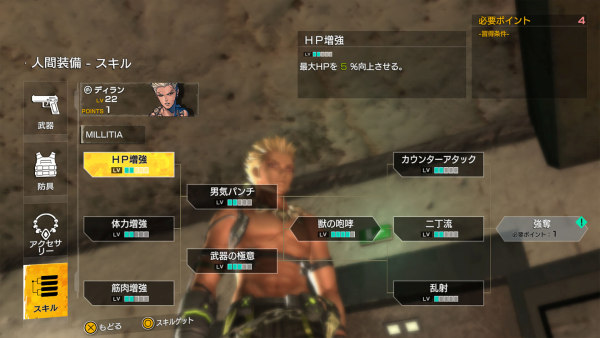 —Win the battle in a single hit with “Manly Punch!” This is an active skill for male characters in the “Militia” skill tree that deals more damage to the enemy by taking additional damage yourself. 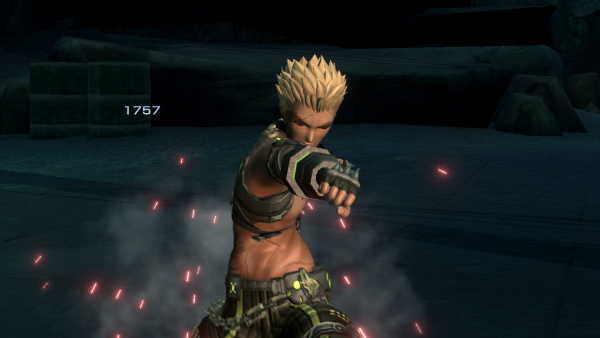 A sexy woman soldier known as the Immortal Maria. She is a true soldier who has fought in war since she was a child. She continues to fight to protect an important facility in Dystokio from the monsters’ attack. 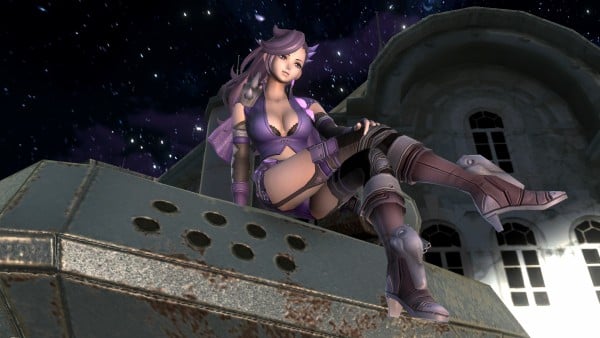 Similar to Dylan, Maria has additional skills centered on the “Militia” skill tree, which are both precise and high-powered.

—Maria has the unique skills “Earth Rumble” and “Human Patriot.” 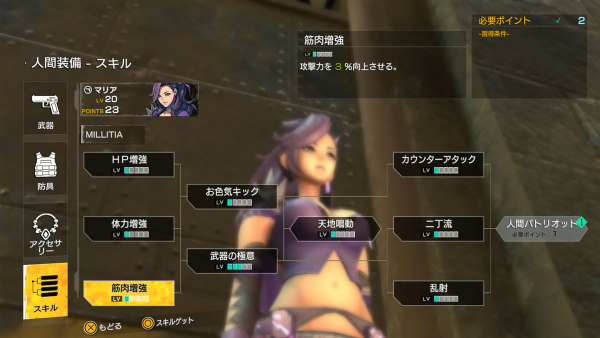 —“Earth Rumble” allows Maria to make the first strike at a further distance than usual. 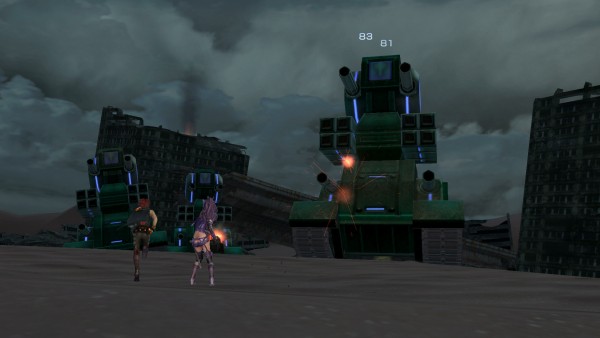 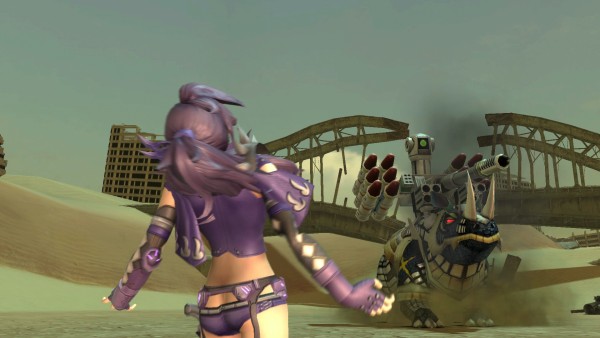 ■ Misaki, the Cool and Beautiful Medic

A beautiful medic with the appearance of a woman. He is a mysterious young man who, while intellectual and gentlemanly, sometimes comes off as someone who has given up on on hates humanity. 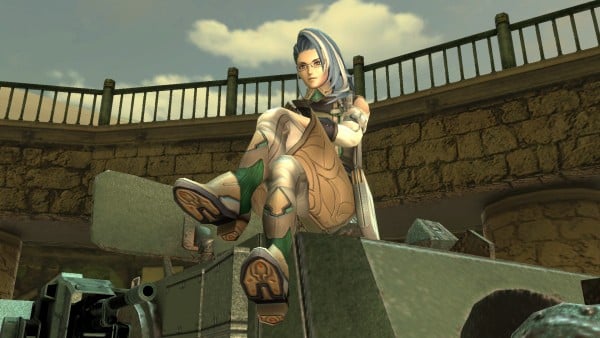 Misaki can learn medical skills based on the “Medical” skill tree unique to a war medic.

—The “Medical” skill tree is dedicated to medical abilities that are mainly effective in human battles. Misaki has the unique skill “Bomb Master.” 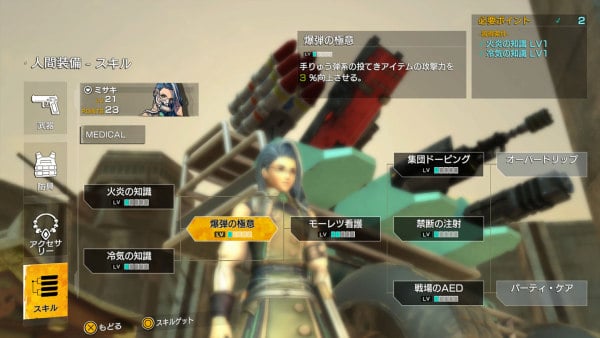 —“Banned Syringe” is a skill that kills bio-type enemies in a single hit. This skill is perfect for Misaki, who is regularly equipped with medical instruments as weapons. 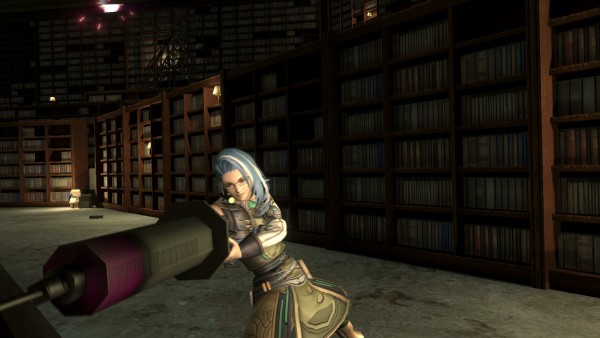 A mysterious survivor you meet midway through the game. She was once a popular U-Kabuki actor. A mysterious beauty with a tail and of unknown age. 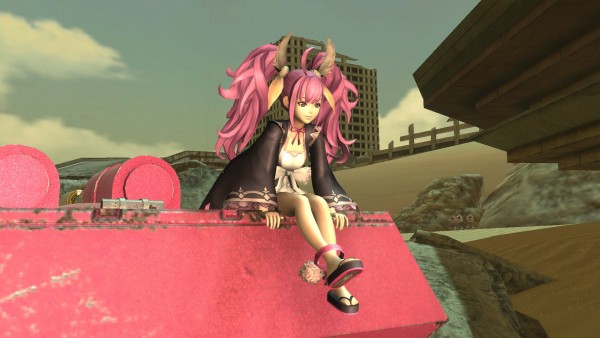 Since she is an actor, Ittica has numerous additional skills that mimic the unique skills of other characters. 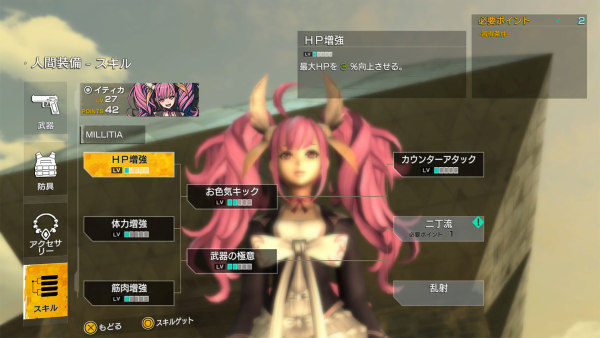 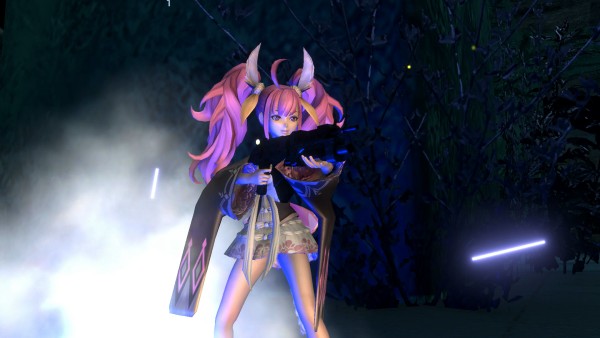 Metal Max Xeno: Reborn is due out for PlayStation 4 and Switch on July 9 in Japan. Read more about the game here, here, here, and here.