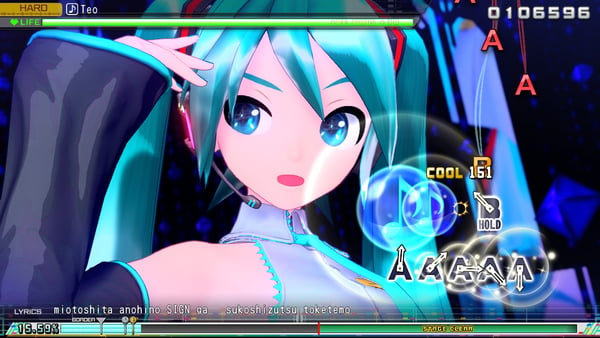 Hatsune Miku: Project DIVA Mega Mix will launch for Switch exclusively via the Nintendo eShop on May 15 in the west, publisher Sega announced.

Digital pre-orders are available now for the $39.39 base version and $59.99 “Mega Pack,” which includes six downloadable content packs, each containing six songs. Each pack will also be available individually for $6.99. The first, second, third, fourth, and fifth packs have already been released in Japan.

For anyone who does not pre-order the game, the “Theme Song DLC Pack” will become available as a free download for all users starting June 12.

A demo is also available now via the Nintendo eShop, which features the songs “Arifureta Sekai Seifuku” and “Romeo and Cinderella,” playable in either the traditional button-based “Arcade Mode” or the new motion-based “Mix Mode.” Several customization options are also available (three modules for Hatsune Miku, as well as character skin changes to Rin, Len, Luka, Kaito, or Meiko).

Hatsune Miku: Project DIVA Mega Mix isn’t just Miku’s Nintendo Switch debut, it’s also a major milestone for the Project DIVA series, introducing a redesigned graphical style. Fan-favorite songs like Senbonzakura and over 100 others have been reinvigorated with anime-style graphics. On top of that, a selection of songs never-before-seen in the Project DIVA series have also been added for Mega Mix, so fans can enjoy playing along with even more of their favorite tracks!