Captains of the Kid Pirates, the Blackbeard Pirates, and the Red Hair Pirates. 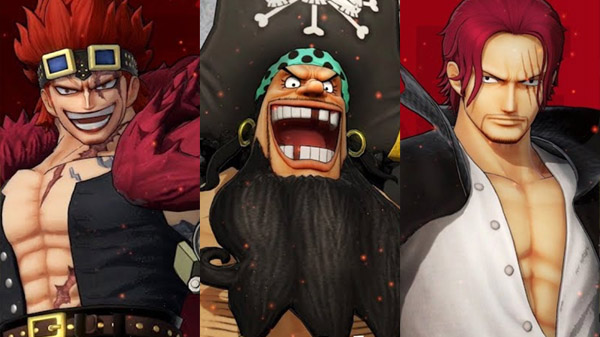 Captain of the Kid Pirates. Commonly known as Eustass “Captain” Kid. Very prideful and violent. His bounty is high even among the Worst Generation, because of his lack of scruples to achieve his goals, even hurting innocent civilians. After the Summit War, he encounters Kaido, who suddenly appeared after he made a name for himself in the New World. He fought Hawkins and others, but was defeated and captured by the Beast Pirates.

The captain of the Blackbeard Pirates, also known as “Blackbeard.” He was once a member of Whitebeard’s Pirates, belonging to the second division led by Ace. He broke into Impel Down and added some terrible criminals to his crew, and then also obtained Whitebeard’s powers for himself, rapidly expanding his forces and allowing him to become one of the Four Emperors of the New World.

Captain of the Red Hair Pirates and one of the Four Emperors who reign over the New World. He met Luffy as a young boy, who had always been drawn to pirates, and saw Luffy’s predisposition before anyone else. He lost his arm saving Luffy, who fell into the sea. At the time of their farewell, he entrusted his straw hat to Luffy and made him vow to become a good pirate and return it to him. Usopp’s father is part of his crew.

One Piece: Pirate Warriors 4 launched today for PlayStation 4, Xbox One, Switch, and PC via Steam worldwide. Read more about the game here.