A look at the scenery of Liyue Harbor. 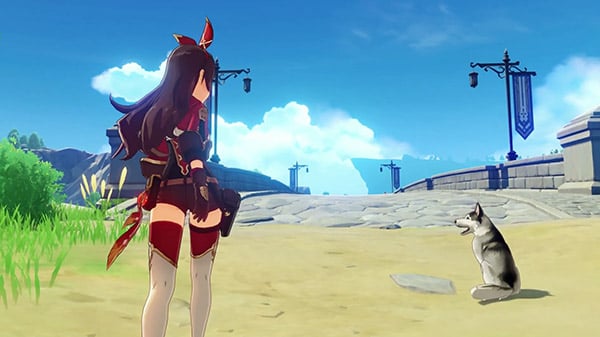 Users who signed up for a chance to participate in the closed beta test will be notified by email. Additionally, winners of the Gematsu closed beta test keys giveaway have also been notified. (Please check your Disqus notifications for further instruction.)

miHoYo also released a preview video showcasing the scenery of Liyue Harbor that players will be able to explore during the closed beta test. Here is an overview of the trailer, via miHoYo:

In the latest gameplay trailer, character Amber leads audiences on a new adventure from Mondstadt—the city of wind (Anemo)—to Liyue Harbor, the city of rock (Geo) which is described as a new, eastern, fantasy locale. During the journey, players can take on quests to slay increasingly more challenging and merciless monsters by utilizing a team of up to four characters, who each use different elemental play styles to bring justice and peace to this wonderland. Bountiful landscapes and natural vistas can be discovered, including lush bamboo forests and misty waterfalls, which all encourage players to slow down and enjoy the scenery. When players eventually come to Liyue Harbor, numerous appealing kiosks from a faraway time tempt players moving through the bustling harbor.

Genshin Impact is an open-world action RPG title that takes place in a massive fantasy land of Teyvat, which offers a lively, freely-explorable world, multiple characters, an in-depth elemental skill & talent system and an engaging story. Players will take on the role of a mysterious figure referred to as “The Traveler” that completes various quests to find their long-lost sibling to piece together their own mystery while unraveling Teyvat’s many plots and secrets.

Watch the closed beta test preview trailer below. View a new set of screenshots at the gallery.