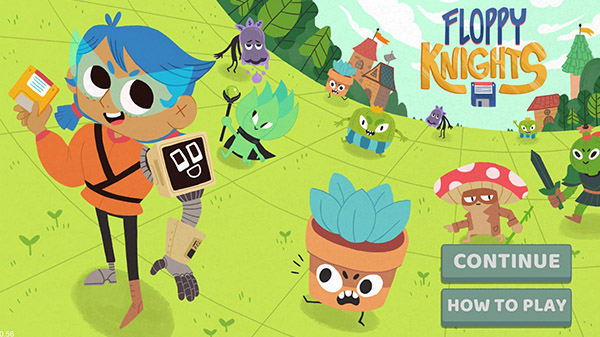 Publisher Those Awesome Guys and developer Rose City Games have announced Floppy Knights, a game that combines the tactical elements of games like Advance Wars and Fire Emblem with the deck-building mechanics of games like Slay the Spire. It will launch for PC via Steam sometime in 2020.

Here is an overview of the game, via Those Awesome Guys:

What do you get when you bring a microprocessor to a knight-fight? A deck-building, sword-swinging, tactical adventure! Meet the Floppy Knights: tangible projections summoned from floppy disks who will help Phoebe and Carlton earn cash and perhaps even save the world in the process.

This game was originally concepted by Marlowe Dobbe in the same concept jam that Rose City also began the ideas for our two previous games: The World Next Door and Cat Lady! At this concept jam, which was about two years ago, we know we really liked this idea, but ended up sitting on it for a while, while we worked on our other two titles first.

The time spent sitting on this concept was valuable, though: as we continued progress with The World Next Door and Cat Lady, Marlowe was able to continue developing the world and it’s characters. While the original pitch for this was focused more on the IP, we realized we wanted to do something tactics-related (similar to Advance Wars). We had the opportunity to work with Intel creating developer tools, and with the funding obtained from that, we were able to begin the initial prototypes for Floppy Knights.

During Fall 2019, we also created a paper prototype of the game, taking it to feedback nights with our local indie game community to begin receiving feedback on the gameplay. At PAX West 2019, we began our search for a publisher, and are happy to share that we’re currently working with Those Awesome Guys to bring Floppy Knights fully to life!