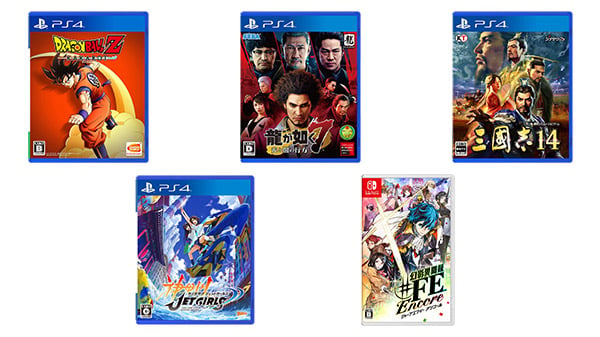 Dragon Ball Z: Kakarot is an action RPG developed by Naruto Shippuden: Ultimate Ninja Storm series studio CyberConnect2. It follows the story of the Saiyan Goku from the Saiyans’ invasion of Earth to the defeat of Majin Buu. Through training, eating, and more, players will be able to upgrade Goku’s skills.

The latest mainline entry in the Yakuza series, Yakuza: Like a Dragon (known as Yakuza 7: The Whereabouts of Light and Darkness in Japan) stars protagonist Ichiban Kasuga in a story about rising up from the bottom. Combat uses a “Live Command RPG Battle” system. Cities in the game include Isezaki Ijincho, Yokohama; Sotenbori, Osaka; and Kamurocho, Tokyo.

Based on the original Tokyo Mirage Sessions #FE released for Wii U in 2015, Tokyo Mirage Sessions #FE Encore is an enhanced version for Switch with new elements such as additional songs and scenario. The game is set in Tokyo and pits protagonist Itsuki Aoi and company against Mirages, rogue spirits from another world, in unison with friendly Mirages based on characters from the Fire Emblem series.