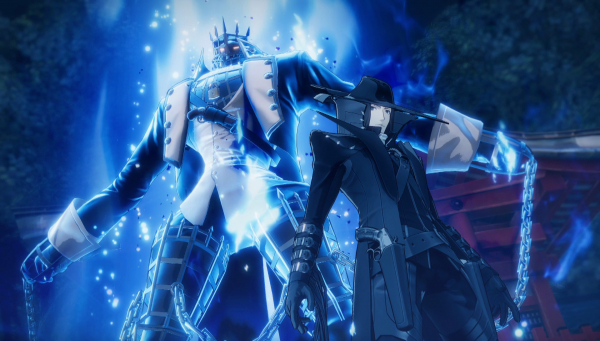 The company also announced that a downloadable demo for Persona 5 Scramble: The Phantom Strikers will launch via the PlayStation Store and Nintendo eShop on February 6 in Japan. A launch live stream ahead of the game’s February 20 release was also confirmed, with details to be announced at a later date.

With its valuable cultural heritage such as temples and shrines, Kyoto is one of Japan’s leading tourist cities. Under the proposal of public safety police officer Zenkichi, who is going along with them, the Phantom Thieves stop by Kyoto.

Zenkichi’s home is in Kyoto, which is where his daughter Akane Hasegawa (voiced by Naomi Ohzora) lives. She seems to be a big fan of everything related to the Phantom Thieves of Hearts.

However, even in Kyoto there is a Jail that awaits the Phantom Thieves. They decide to challenge the Kyoto Jail, which has the appearance of a large shrine. Inside are countless torii gates, which warp you to a completely different location when passed through. If you try to move forward recklessly, you will never reach your destination. The Jail must be cleared with utmost caution.

But something happens to Zenkichi’s body in the Kyoto Jail…

Osaka, The City of Food and Humanity

Osaka is the largest city in western Japan. Dubbed “the city where you eat till you drop,” it is a place filled with food and humanity. It is also where the headquarters of the global IT company Madicce is located, which appears to be deeply involved in the current “Conversion Incidents.”

Akira Konoe (voiced by Tooru Oogawa) is the president of Madicce. He is a go-getter president who has caught the hearts of many with his innovative services and charismatic nature.

And awaiting the Phantom Thieves in Osaka is the Osaka Jail, which has the appearance of a futuristic city. It is an impregnable Jail with security robots on patrol and surveillance cameras installed throughout. With powerful and tough enemies to face, it is a Jail you will have to brace yourself to clear.

Zenkichi Hasegawa awakens to Persona abilities and fights against evil alongside the Phantom Thieves.

He wields a large sword with good reach and twin pistols. He fights using “Absorption” to steal HP from enemies, and “Berserk,” which reduces his HP, but increases his attack power.

His Persona is Valjean. In addition to Almighty and Gun attribute skills, he also specializes in skills that strengthen his allies.

Watch Morgana’s Travel Report #5 below. View a new set of screenshots at the gallery.