Something strange is happening on the resort island Kuukojima. 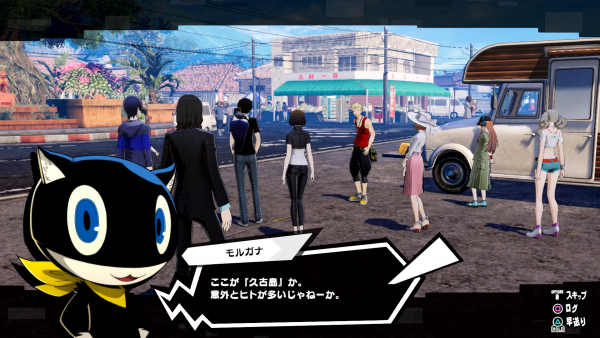 Atlus has released the fourth “Morgana’s Travel Report” for Persona 5 Scramble: The Phantom Strikers, which introduces Okinawa, Cooking, and Requests.

A White Sandy Beach and Blue Sea: An Introduction to Okinawa

Pursuing the mysterious case, the Phantom Thieves visit Kuukojima, a resort island just off the mainland of Okniawa. It is a lively island with beautiful waters and beaches, as well as tourist shops around the harbor.

While pursuing the case, the Phantom Thieves enjoyed a brief vacation, but there was something strange about the island’s inhabitants… There seems to be some sort of secret to this island.

While exploring the island’s secrets, you will wander into the Okinawa Jail, a research laboratory turned into an abandoned castle. A dangerous jail with the ominous atmosphere of a horror movie, Shadows lurk in the darkness and attack one after the other. The voice recorders found in various areas are likely a clue to what is happening on this island.

By utilizing the “Phantom Move” ability, which allows you to quickly move to high altitudes and under cover, you can unleash various actions. Phantom Move can even break through cracked areas including glass that may be blocking your path forward. Sneak up on the enemy from behind for a surprise attack, and take advantage of the Jail’s mechanics to clear it like a pro.

In Jails, you may sometimes encounter a locked door. At these doors, “Hacking Battles” will occur to unlock the door via the navigator’s hacking abilities. While hacking, you must protect the navigator from the Shadows that attack.

In Persona 5 Scramble: The Phantom Strikers, you can “Cook” by using the ingredients you obtained. The food you make will be available for use as items, which offer various effects such as HP and SP recovery, strengthening party members, and more. “Recipes” can be obtained from the game’s various shops and events to increase your cooking repertoire.

As you progress through the story, various people may ask for “Requests.” There are various types of Requests, including helping out those in need, requests from members of the Phantom Thieves, and more. You can obtain valuable rewards by completing Requests, so be sure to do as much as possible.