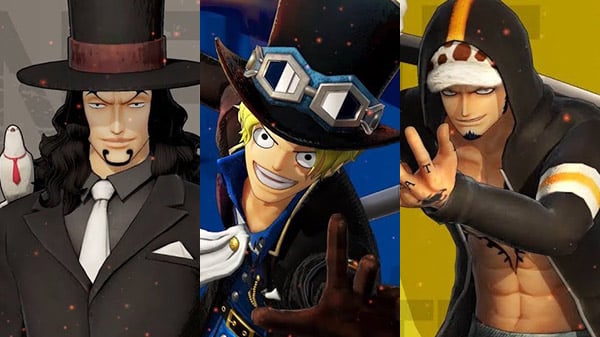 An intelligence officer of a clandestine World Government organization called “CP9.” He pretended to be a peg/nail foreman at the Galley-La Company in order to search for the blueprints to the Ancient Weapon “Pluton.” He can use the almost superhuman “Six Powers” and the Devil Fruit power, having eaten the Cat-Cat Fruit Leopard Model. He possesses the greatest combat abilities for a CP9 agent, and is known as a cold “killing machine.”

The Revolutionary Army General Chief of Staff. Luffy and Ace’s brother. Born as a noble of the Kingdom of Goa, he came to hate its corrupt aristocratic society and set out for the high seas. He is a Haki user, and his weapon is his beloved iron pipe that he has been using since childhood, as well as a strong grip technique that he calls the Dragon’s Claw. He inherited Ace’s Flame-Flame Fruit power.

Captain of the Heart Pirates, a doctor. Also known as the “Surgeon of Death.” A power user who ate the Op-Op Fruit, he can create a spherical space inside which he can then move objects or parts of bodies around, and even reattach them differently. He can also just swap people’s minds around.