Go on an adventure full of whimsy, wonder, and high-powered weaponry. 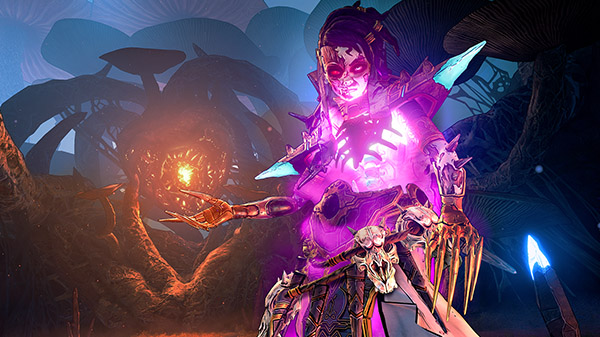 Embark on an epic adventure full of whimsy, wonder, and high-powered weaponry! Bullets, magic, and broadswords collide across this chaotic fantasy world brought to life by the unpredictable Tiny Tina, who makes the rules, changes the world on the fly, and guides players on their journey.

Customize your own multiclass hero and loot, shoot, slash, and cast your way through outlandish monsters and treasure-filled dungeons on a quest to stop the tyrannical Dragon Lord. Everyone’s welcome, so join the party, throw on your adventuring boots, and be Chaotic Great!

All players who pre-order the game will receive the Golden Hero Armor Pack, a unique armor preset. This in-game item is available for all editions on all platforms. Pre-order offer available through March 24, 2022.

In addition to the various editions of the game itself, players may also purchase the Tiny Tina’s Wonderlands Treasure Trove, a physical crate of collectibles that includes the following limited-edition items for an SRP of $99.99:

Please note that the Treasure Trove does not include a copy of the game and is not available in all territories. Supplies are limited.