The final character of the final season revealed. 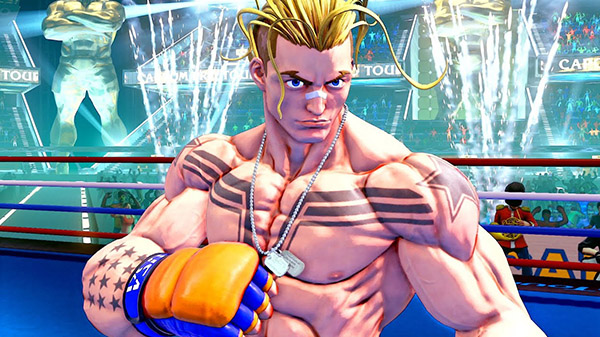 Get the latest details below, via Capcom Unity.

Oro’s V-System: Something Old, Something New, and Eyes Turned Blue

Oro’s V-Skills and V-Triggers are a combination of older moves from Street Fighter III, as well as brand new moves that give Oro a variety of options for attacking his opponents. His V-Skill I, “Onibi,” is a bouncing orb projectile reminiscent of his “Yagyodama” Super Art from Street Fighter III. This orb can bounce at three different trajectories depending on the direction held when activated and it can negate opponent’s projectiles.

Pro tip from director Takayuki Nakayama: “The best time to activate ‘Onibi’ would be after knocking back the opponent with the heavy version of ‘Tsuranekeashi’ or the EX Version of ‘Nichirin Sho,’ which is another projectile that chases after the opponent and is hard to avoid.”

—Get the most mileage from “Onibi” after throwing a projectile or a knockdown!

Oro’s V-Skill II is “Minomushi,” a short hop that can be canceled off of normals and has two different follow-up attacks. The punch follow-up, “Kaki Otoshi,” is an overhead. The kick, “Eda Uchi,” is a move that closes the distance and is difficult for opponents to punish on block if you hit them with the edge of the attack.

—“Kaki Otoshi” hits overhead and can lead to a combo!

With Oro’s V-Trigger I “Manrikitan,” his eyes burn blue and give him access to his command grab “Kishinriki” on the ground and “Kishin Kuchu Jigoku Gurama” in the air.

—With his eyes glowing blue…

—snatch your opponents on the ground…

Oro’s “Tengu Stone,” also makes a return as his V-Trigger II. Oro pulls in three objects above his head that can create combos that weren’t possible before. Random rare objects, such as Sean’s Basketball or Blanka-chan, will add some extra damage or stun depending on which item you get.

—A variety of different items appear with “Tengu Stone!”

If you hold Down while activating his V-Trigger, Oro will produce five objects instead of three. This move is called “Tengu Midare Stone,” and will drain the V-Gauge much faster… but it also opens up even more combo possibilities.

With “Tengu Midare Stone” included, all of Oro’s classic and secret moves have been incorporated into Street Fighter V, with even new hidden techniques added to the mix! All the while, he keeps his turtle friend safe in his opposite hand, maintaining his “one armed” style of fighting. Sometimes he’ll have the turtle levitate or balanced atop his head though…

New to the world of Street Fighter, Akira Kazama got her start in the fighting game world in the Rival Schools series, which debuted in 1997. The original game was a one-on-one style fighting game where players could call in teammates as assist characters.

In Street Fighter V, Akira calls upon the help of her older brother Daigo as her V-Trigger assist, similar to that of Rival Schools. Her playstyle is best when she’s up-close and personal, although she also has a few long range moves that can help keep opponents at bay. Let’s dive deeper into her moves.

Akira brings her old moveset from Rival Schools alongside with some new tricks! “Kiko Kai” is a short ranged energy blast that can quickly and easily combo from normal attacks. The EX version has a longer range that can be utilized to control space.

—“Kiko Kai” throws a blast of energy from Akira’s hand.

“Urarimon” is a fast elbow strike that allows Akira to close the gap and deal a good amount of damage. She also can follow up with more attacks after landing the hit, but its best used as a combo ender.

Her “Senshubu” kick has three variations: low, medium, and high. Once you land a successful hit, you can maximize your damage utilizing the proper combo ender!

Akira’s V-Skill I “Kiko Rensei,” enhances her “Kiko Kai” by adding more hits and damage to the attack. The enhanced EX version will also get a wall bounce, nullify opponent projectiles and the mid-air version gets an enhanced falling trajectory.

Her V-Skill II, “Tsutenda,” is an adaptation of a move that originates from Rival Schools, where Akira launches her opponents into the air for combo opportunities called “Air Bursts.”

This move can also be utilized at the end of her Target Combo for a “Short Air Burst,” which launches opponents at a shorter height than a regular “Air Burst.”

If you’ve watched our Street Fighter V Spring Update this past April, then you’ve already seen Akira’s V Trigger I. It’s called “Otoko No Senaka” and features her brother Daigo dropping down from the sky and slamming the opponent in an energy burst explosion!

—Attack your opponent alongside Daigo!

Once Daigo is on the scene, he will continue to attack even if Akira gets hit! He can even interrupt opponents if they have Akira in a combo.

Her V-Trigger II, “Haten no Kamae,” puts Akira in a special fighting stance where she can execute three different follow-up attacks. Once activated, the V-Gauge becomes a timer allowing her to execute “Haten no Kamae” up to two times.

—“Haten no Kamae,” puts Akira in a special stance!

Each follow up attack has unique attributes depending on the button press. You can add damage and hits to your combos or execute an attack that is safe on block. You can also cancel the stance at any time and go for a throw instead! This V-Trigger is great for combo extensions or setting up frame traps and mixups.

Akira has studied up and is ready to educate anyone who gets in her way! We hope you are ready to experience the perfect merging of Rival Schools gameplay within Street Fighter V when Akira arrives on August 16!

Rival Riverside, a Rival Schools stage near a river and near Akira’s school, Gedo High School is a new stage that will be arriving alongside Akira, on August 16. The sunset means it’s after school hours, so you might see some other Rival Schools characters hanging around too.

We’ve also shared more details on the Online Tournament Mode! This free mode will be launching alongside Oro and Akira on August 16 and will be available to all players. Through this mode you’ll be able to create and participate in your own online tournaments with friends, Dojo members, and anyone from Street Fighter V community! You’ll be able to tinker with a wider variety of rule sets to make your tournaments as wild or restrictive as you want. We’ll have more information on this mode very soon, including some fun tournaments hosted by us, so stay tuned!

Our biggest Summer Update 2021 announcement was about the one thing on everyone’s mind since we first announced Season 5: the fifth and final character for Street Fighter V!

Introducing Luke, a brand new character that will help expand the world of Street Fighter. Check out the announcement video:

From what we can see, Luke appears to focus on moving fast and hitting hard. His punches even shoot beam-like projectiles at an alarming speed! Luke will step into the ring November 2021, and we can’t wait to share more info about him soon!

In addition to all the Street Fighter V news, we also announced our second collaboration with Fortnite! Guile and Cammy will be joining Fortnite as new outfits with unique emotes, obtainable for a limited time starting August 7. Also, be sure to check out the Cammy Cup tournament hosted by the Fortnite team, happening on August 5.

Now that Luke has been revealed as the final character in Street Fighter V, check out what’s updated with the Season V Pass, including all five characters, costumes, and more!

In addition, we’re offering a Free Trial on PlayStation 4, from August 4 through August 18, where you’ll have access to Street Fighter V Seasons 1 to 4!

Get the following content at a discount (PlayStation 4, Steam):