Wizardry: The Five Ordeals for Steam launches in Early Access on June 18

Revival gets a release date. 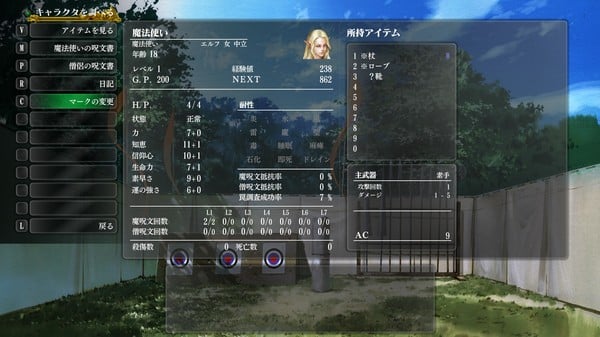 Wizardry: The Five Ordeals will launch in Early Access for PC via Steam on June 18, Game*Spark Publishing and developer 59studio announced.

As previously announced, the Early Access release includes all the features of the original 2006 version, with all official scenarios implemented playable up until the ending. The user interface and editor, however, still require adjustments.

The Best Spin-Off of Wizardry, Beloved for 15 years in Japan, is Coming to Steam

The Wizardry series was born in 1981. In Japan, it is known as the originator of hardcore fantasy games, and many Japanese fantasy works have been under its influence.

In the old Wizardry which follows the old hack-and-slash TRPG style, the objective is to create a character / party in the training center on the edge of town, and conquer the labyrinth in first-person dungeon crawls. Combat is a simple turn-based system, now synonymous with Japanese RPGs, and storytelling is narrative-heavy. The Japanese still believe that is one and only masterpiece.

Wizardry: The Five Ordeals was made in 2006 and aspires to go back to the old-school. It was created by the staff of the Wizardry Gaiden series, a spin-off of the Wizardry series known in Japan. Five independent scenarios (each taking a dozen hours to complete) can be played in one software package. Main monster designs are by Jun Suemi (Japanese famous illustrator), and background music is by Basiscape (known for 13 Sentinels: Aegis Rim).

This game’s biggest main feature is Scenario Editor. You can make your own old-fashioned dungeon crawler, and you can also play those made by others. Of course, the balance of the game is yours to decide. Over the past 15 years, Japanese users have created more than 110 scenarios, and were the driving force behind bringing the game to Steam.

In this version of Wizardry: The Five Ordeals, remade under the Unity engine, almost everything has been overhauled except for the game balance and foundation of the game. Play this game as a new old-school title made in 2021.

At launch, the each official scenario (scenario message, item name, monster name, etc.) and scenario editor have not been translated into English. But the game itself already has an English user interface (there will be some untranslated and unadjusted parts). We are doing our best to translate the missing parts into English.