Plus new Mii Fighter costumes featuring Dante from the Devil May Cry series. 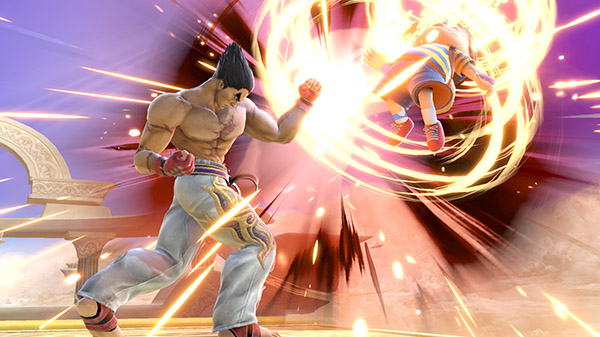 Super Smash Bros. Ultimate downloadable content character Kazuya Mishima from the Tekken series will launch on June 29 for $5.99, or as part of the “Fighters Pass Vol. 2.” for $29.99, Nintendo announced.

Director Masahiro Sakurai also confirmed that the next downloadable character following Kazuya Mishima will be the last.

“Now that I think about it, it’s been close to 10 years since Super Smash Bros. for the Wii U and Nintendo 3DS systems was in development,” Sakurai said. “I’ve been working on this for a long time. You could call it my life’s work. But finally, the next downloadable content fighter will be the last one. There won’t be any more after that. It’ll be a while before that announcement, but it’ll be available this year as planned.”

Get the latest details on Kazuya Mishima and more below.

On June 29, the vengeful Kazuya Mishima from the Tekken fighting game series joins the Super Smash Bros. Ultimate game for the Nintendo Switch system as part of the “Challenger Pack 10” downloadable content, which also includes a new stage and a selection of music tracks from the decades-spanning Tekken franchise. In a video hosted by Masahiro Sakurai, the Super Smash Bros. series director provided a deep dive into the new fighter’s move set, as well as a detailed look at the new Mishima Dojo stage.

Challenger Pack 10 is part of Super Smash Bros. Ultimate “Fighters Pass Vol. 2,” which can be purchased for $29.99 and also includes Min Min from the ARMS game, Steve & Alex from Minecraft, Sephiroth from the Finl Fantasy series, Pyra / Mythra from the Xenoblade Chronicles 2 game, and one yet-to-be-announced fighter that will release later this year. “Challenger Pack 10” can also be purchased separately for $5.99.

Debuting more than 25 years ago in the original Tekken game, Kazuya Mishima is one of the most recognizable faces in the storied fighting game series. Kazuya moves from the arenas of Tekken, where players must understand the space between characters and focus on where to hit their opponents in a 3D plane, to the battlefields of Super Smash Bros. Ultimate, where players must attack their foes through 2D heights and distances. Because of this change in gameplay dimensions, Kazuya shows off a special skill set in Super Smash Bros. Ultimate when compared to his Tekken roots.

The new stage that players will receive in “Challenger Pack 10,” “Mishima Dojo,” is the dojo of the Mishima family—specifically Kazuya’s father Heihachi. The dojo is closed off in all directions, but its walls and ceiling can be broken with strong attacks, turning the stage into dangerous terrain. With no floating platforms, the Mishima Dojo stage is more grounded than many other stages in Super Smash Bros. Ultimate, requiring new strategies when battling on it.

After downloading “Challenger Pack 10,” players will also receive 39 music tracks from the Tekken series, containing a mix of songs from earlier and more recent games in the franchise.

For those looking to arm themselves with even more Super Smash Bros. fun, a new Super Smash Bros. Ultimate amiibo is on its way! Min Min, the fighting noodle girl from ARMS, will be available for purchase at select retailers in 2022.