From the studio behind Gothic Murder: Adventure That Changes Destiny. 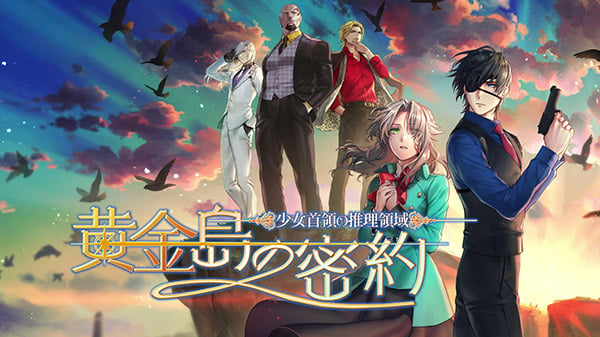 Otome Shuryou no Suiri Ryouiki: Ougon Shima no Mitsuyaku (Maiden Boss Deduction Domain: The Secret Pact of Golden Island), the second entry in Orange’s romantic mystery game series following Gothic Murder: Adventure That Changes Destiny, is now available for Switch via the Nintendo eShop in Japan, and will launch for PC via Steam on June 23, followed by PlayStation 4, iOS, and Android on June 25, the developer announced.

On an island controlled by the mafia, a girl’s dangerous investigation begins…

Orange’s second romantic mystery game following Gothic Murder. Otome Shuryou no Suiri Ryouiki is an original mystery game from the creators of numerous mystery adventure games including the Jake Hunter Detective Story series and Inuwashi, in which players can enjoy a suspenseful mystery set on an island.

2002. On the Guimul Islands in the Atlantic Ocean.

The story begins when the protagonist, who left the island as a child after her parents divorced, returns home for the first time in 10 years.

While reuniting with her father, a mafia boss, he dies a suspicious death.

Knowing that the island is controlled by four mafia families, and that even the police would find it difficult to investigate the case without the mafia’s help, the protagonist decides to follow in her father’s footsteps and uncover the truth behind his death.

What further incidents and treasures await as she weaponize evidences in clashes with the mafia, while occasionally under protection as a boss?

When you finally solve the mystery, you will be faced with a major decision…

Investigate various locations and formulate your reasoning based on the information you collect. Simple, intuitive controls will help you solve the mystery. Depending on your choices, the story will branch into multiple endings.