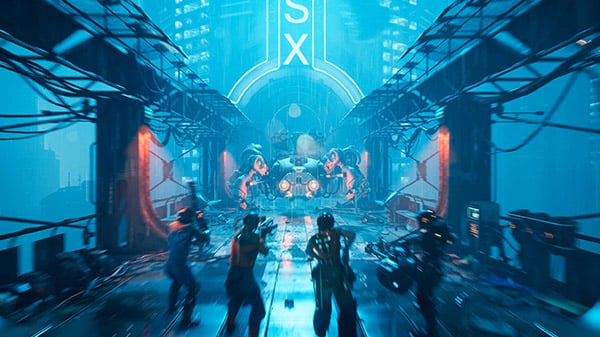 Science-fiction action RPG The Ascent will launch for Xbox Series X, Xbox One, and PC via Steam, as well as via Xbox Game Pass, on July 29, publisher Curve Digital and developer Neon Giant announced.

“We are super excited that people will soon be able to jump into the world of The Ascent,” said Neon Giant creative director and co-founder Arcade Berg in a press release. “We love making games and we do it because we want people to enjoy the experience and world we have created—so we’ve designed a game that lets all players have fun with the element of gameplay that interests them the most. Whether you’re someone who enjoys exploring every corner, loves exciting combat or gets invested in the story and lore, we’ve tried to put something in The Ascent for everyone.”

Fellow co-founder and creative director Tor Frick added, “A month ago we celebrated Neon Giant’s third anniversary and we’re so happy to be launching our first title just after this milestone for our young studio. We have a very passionate and dedicated team and each person in the studio has brought something new and great to the overall experience of The Ascent, so we’re really excited to share the planet of Veles with everyone and see what people think of the world our team has created.”

A solo and co-op action-shooter RPG set in a science-fiction cyberpunk world, The Ascent is the first title from Neon Giant, a new 12-person studio composed of games industry veterans who were some of the minds behind iconic AAA titles such as the Gears of War, Bulletstorm, and Wolfenstein franchises. The game will target 60 frames per second and have full 4K support on the Xbox Series X, offering amazing gameplay performance for new generation console players.

The Ascent will offer players the chance to step into an action-orientated science-fiction RPG powered by Unreal Engine that takes the genre to new levels, available to play in both single-player and up to four-player co-op.