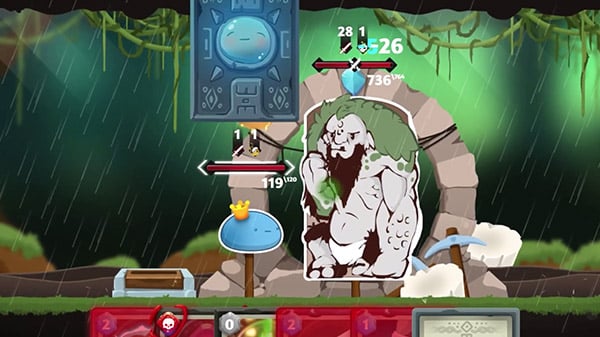 Roguelite deckbuilder Rise of the Slime will exit Early Access for PC and launch for PlayStation 5, Xbox Series, PlayStation 4, Xbox One, Switch, and PC via Steam on May 20, publisher Playstack and developer Bunkovsky Games announced. A demo featuring the first 30 minutes of gameplay and some extra content not yet seen in Early Access is also available now for Switch and PC.

“This has been my labor of love since 2018,” said Rise of the Slime solo developer Maris Bunkovskis in a press release. “It’s really indescribable how it feels to see the culmination of your creative ideas take on life, ready to be enjoyed by everyone. Thank you to our community for helping me bring this game to its current state—I’m really looking forward to bringing the lil’ slime out of Early Access on May the 20th and I hope you will enjoy the game and have some good times with it.”

Offering a unique mix of deep, tactical deck-builder gameplay with the chill vibes of a side-scrolling adventure, Rise of the Slime plonks your squidgy hero in an enchanted and dangerous world. Help Slime overcome the odds by playing insanely powerful cards in turn-based, positional combat against a bunch of baddies—though you just might feel terrible dousing them with acid.

With the help of fancy hats and pet companions to spice up your adventures, you’ll traverse beautiful and exotic lands, from sizzling fire swamps to toxic marshlands to a breezy unfurling garden populated by sexy radishes!

Remnant: From the Ashes PS5 and Xbox Series optimization update launches May 13 Previous post
Free-to-play The Division: Heartland and The Division mobile game announced Next post