Hand-drawn puzzle platformer Out of Line launches this summer for Switch and PC, later in 2021 for PS4 and Xbox One

Follow San on his quest to escape the Factory. 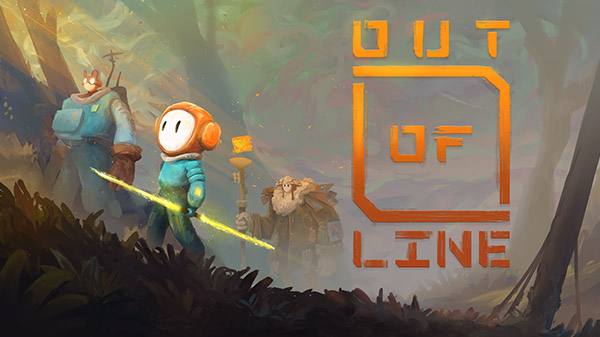 Publisher Hatinh Interactive and developer Nerd Monkeys will release hand-drawn puzzle platformer Out of Line for Switch and PC via Steam this summer, followed by PlayStation 4 and Xbox One later in 2021, the companies announced.

Originally announced for PlayStation 4 in 2018, Out of Line was a recipient of the Portuguese PlayStation Award for Best Game. It depicts the adventures of a young boy named San who is trapped in a factory controlled by an ominous and strange entity.

“Out of Line is being designed with a stylized approach,” said Nerd Monkeys lead artist Francisco Santos in a press release. “The mechanics of the game revolve around San’s spear, something the character sees as a tool that will help him navigate this strange world. We want players to learn through experimentation, constantly tinkering with puzzles until they find a logical solution. This design philosophy plays a thematic role in our game, as most individuals find their purpose through trial and error.”

Hatinh Interactive CEO and co-founder Philippe Dao added, “We are thrilled to be the publisher Out of Line later this year as we are keen to bring to fans of puzzle, platformers, and action games a unique experience and a full immersion thanks to the story and the beautiful poetic world of Out of Line.”

Here is the official fact sheet and Q&A, via Hatinh Interactive:

A unique adventure game filled with beautiful puzzles all hand-drawn in a unique 2D style. Out of Line follows the adventures of San in a quest to escape the Factory that was once home. Dive into a story set in a mysterious world that is revealed through multiple chapters.

What is Out of Line?

Out of Line follows a child (San) on a quest for freedom. Along the way, San will have to rely on new friends to overcome many obstacles and uncover one of life’s greatest lessons. The game is a 2D side-scroller puzzle platformer, with captivating visual environments and a strong artistic charm.

What key features does Out of Line have that characterize it?

Out of Line is set in a mysterious world created in hand-drawn 2D art style where you, a child named San, progress through an immersive and enticing story.

Each new level and discovery is one step closer to help the player interpret and theorize what Out of Line is about, giving heavy meaning and a sense of purpose to the art, levels, game mechanics and puzzles.

Instead of making heavy use of text or a voice-over, it’s the player’s curiosity for exploration and interaction with the world that conveys the story.
The mechanics of the game revolve around San’s spear, something the character sees as a tool and not as a weapon.

While this helps to convey important personality traits for San, it also is the core concept that defines the broad gameplay experience of Out of Line.
In this journey, the player will have to trust his spear and avoid being caught by very odd machines that keep hunting him while overcoming a series of obstacles and puzzles, in search of meaning and freedom, in this strange world.

Can you tell us a little more about Nerd Monkeys?

For the past eight years, Nerd Monkeys has been driven by a sheer passion for compelling videogames, be it because of their captivating storytelling, the unique visuals or the fun gameplay mechanics and the experiences they can provide to people. We’re a bunch of crazy creatives and we chose to apply our know-how into making cool games. Out of Line was brought to life by those core motivations. It is an incredible and emotional voiceless narrative with a unique art style. We developed several B2B client projects and, most recently, ports. Our first original game was a point-and-click pixel art adventure for Steam and mobile. Since then, that IP has already had a sequel and a Nintendo Switch port. We are now working on a new incredible and emotional voiceless narrative with a unique art style. You’ve guessed it, that is Out of Line!

Can you tell us more about the studio’s artistic and historical inspirations?

There are a few different teams with different projects being developed. The style of each game will reflect the artistic sensibilities of the lead producer and artists involved in each specific project. That’s why Out of Line has a very distinct art style that differs from any of our previous titles. The game started out as a school project from Francisco Santos, who was later joined by Joao Genebra. It was such a promising project that it won a PlayStation Talents Award in 2017. Nerd Monkeys enthusiastically welcomed them and provided the infrastructure and tools to help Out of Line reach a fully developed state. The artistic references for Out of Line come from a lot of different places. Ranging from animation movies and short films, such as Ghibli movies or feature animation shorts films, to modern painting movements such as impressionism and expressionism, taking influence from their aesthetics and philosophy. Also, it’s impossible to not be influenced and inspired by other video games, especially by some of the classics in this genre, like Ori in the Blind Forest, Limbo, or Inside.

Does the studio have other games in development?

Oh boy, where to start! Out of Line is clearly one of our main titles in development right now, but we have many promising projects being “baked” as we speak. It’s very exciting to see what crazy ideas talented people (or monkeys) come up with and how they implement them in engaging interactive experiences. The genres are also very diversified, so there’s a little something for every gamer to enjoy.

Can we expect some kind of replayability?

Out of Line is a single-player narrative experience. This means the main value in replayability is probably tied to each person’s interpretation of the story. This may lead some people to try to look at the narrative from a new perspective, like rewatching a puzzling movie. Of course one could always go back to get all the collectibles or complete the trophy list too.

Is it possible to have a sequel in the future?

That will be up to two main factors: the game being a huge success and the case of the game’s creators coming up with a jolt of inspiration and wanting to tell us another tale from this universe or characters. However, Out of Line’s story stands as an isolated narrative. Anything else we might add to it is just a bonus.

Can you give us some backstory or curiosities about San?

The main character is not your typical video game hero, he’s just a kid trying to figure the world around him. But in the strange and harsh environment he lives in, he is put in a situation where he sees himself having to make big decisions and to take big leaps into the unknown.

The narrative behind the game and the character lives in the magic and in the courage of this young child, which has the curiosity and the courage to embark on a turbulent journey and into a new adventure.

We wanted this feeling of curiosity and determination in every part of the game, either in dangerous or happy and calm situations.

Which was the biggest challenge while creating Out of Line?

Creating Out of Line was a big challenge for everyone in the team, especially because almost all of the production happened during the COVID-19 pandemic. At first, it was a bit strange to manage everyone and get everyone on the right track, but after a couple of weeks when we started seeing the results and the game gaining form, everyone got their motivation back on track.

Creating this project was a lot of fun, and despite being a lot of work, it was an awesome project for everyone to grow either individually and as a developer. Since we are still a young team, it was really cool to see everyone contribute and get excited to create the best game possible.