Western release due out day and date with Japanese release. 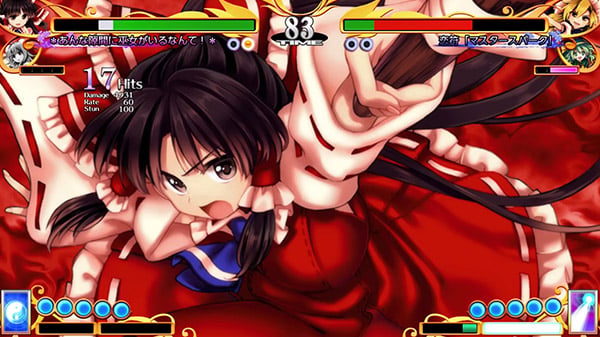 The PlayStation 4 and Switch versions of Touhou Project two-versus-two tag fighting game Touhou Hyouibana: Antinomy of Common Flowers will launch in the west day and date with Japan on April 22 for $34.99 / €29.99, publisher Phoenixx and developers Twilight Frontier and Team Shanghai Alice announced.

“Touhou Hyouibana: Antinomy of Common Flowers‘ fans helped the game shine by creating such a vibrant community and even an English translation which we adopted into the official release,” said Twilight Frontier co-founder and game designer Iruka Unabara in a press release. “Working with Phoenixx to bring this game to console players is a testament of how much they’ve meant to this game.”

Here is an overview of the game, via Phoenixx:

The Touhou Project‘s magical girls square off in tag-team 2D combat where characters can dodge upward and downward to set up attacks. The Primary fighter brings one of their three Spell Cards with special effects to battle, while the Secondary fighter executes assists and can swap in when necessary.

Learn each character and uncover the mystery of the Perfect Possession incident in the Story mode, with the last unlockable character and hardest difficulty available upon completion. Brush up on each fighter in Training mode and put those skills to the test in Vs. COM mode. Then it’s time to take on the world in local head-to-head multiplayer and online play.

Touhou fans can brawl with a duo chosen from a roster of 19 series mainstays like Reimu Hakurei and Kasen Ibaraki, with 19 stages from around Gensokyo to fight in. Officially the 15.5th game in the Touhou series, Touhou Hyouibana: Antinomy of Common Flowers features a story created with the supervision of series creator ZUN with a soundtrack featuring arrangements of beloved tracks by him and other composers from the Touhou franchise.