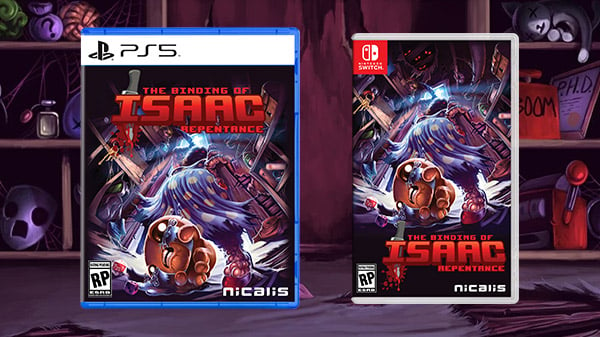 Nicalis will release The Binding of Isaac: Repentance—the “final” chapter in the roguelike twin-stick shooter series—for PlayStation 5, PlayStation 4, and Switch in Q3 2021, the publisher and developer announced.

The PlayStation 5 and Switch versions will also be available in a physical edition, which is available to pre-order now via the Nicalis Store and participating retailers for $59.99.

As previously announced, the PC version will launch via Steam on March 31.

The Binding of Isaac: Repentance takes the Isaac series to new heights of roguelike dungeon adventure, as the tear-shooting toddler descends deeper into the basement for his most incredible challenges yet. Isaac’s new quest takes him to unknown places he’s never been, filled with horrible new enemies and bosses, weapon combos you’ve never synergized before and items he’s never seen… unholy terrors from his wildest dreams and worst nightmares!

The unforgettable “final” chapter in the award-winning Binding of Isaac saga, Repentance is packed with hundreds of insane new features and secret surprises that will delight both longtime fans and new players alike. With new playable characters, a new alternate path with new chapters, a new final boss and THOUSANDS OF HOURS of new gameplay, it’s the ultimate twin-stick shooter / roguelike—a modern classic that you may never stop playing!