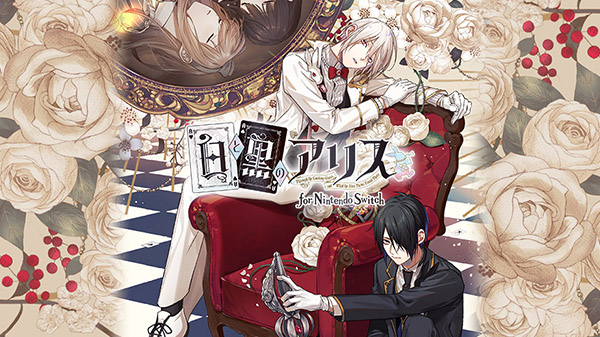 Publisher Idea Factory and developer Kogado Studio will release Shiro to Kuro no Alice for Nintendo Switch on June 24 in Japan for 6,800 yen, the companies announced. A limited edition will also be available for 8,800 yen.

Shiro to Kuro no Alice first launched for PS Vita in June 2017 in Japan.

The sky, covered in clouds—the World of White.

On a rainy day, the heroine Airi, a high school second year student who lives a peaceful life, meets a certain young man on her way home.

The young man, drenched in the rain without an umbrella, tells Airi that he’s “come to meet her.” In fear and confusion, Airi runs away from him, but ends up getting caught.

Suddenly, she finds herself in a place she has no recollection of.

The same young man introduces himself as ‘the Black Rabbit, Rain’ and tells her this:

“Alice, you will now become the queen of this world—”

A blue sky with no edges—the World of Black.

A sudden coup d’état takes place in the land that the second heroine, Luna, rules as the queen.

The Queen’s advisors—the Black Rabbit, Rain, and the White Rabbit, Snow—who saw this as a serious threat, executed a plan which involved Luna taking refuge in the World of White while a candidate for the new queen would be brought back to the World of Black.

The two girls who swap places; the secret behind their two worlds is…?