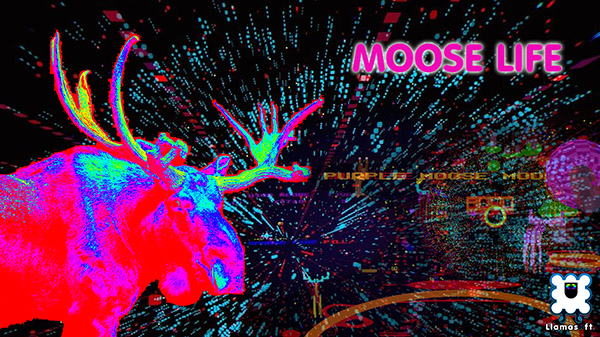 Moose Life, a “psychedelic trance shooter” from Polybius creator Llamasoft and Jeff Minter, is now available for PlayStation 4 via the PlayStation Store for $12.49 / £9.79 / €12.49. It also supports PlayStation VR.

The shoot ’em up, which was created in the style of a 1980s arcade game, first launched for PC via Steam in August 2020.

Moose Life is a trippy, psychedelic trance shooter. Created in the style of a 1980s arcade game, Moose Life offers you an exhilarating ride into the trance zone.

Spectacular shooty action and a top techno soundtrack will raise your mood. If you have virtual reality, immerse yourself for greater satisfaction.

A trippy, exhilarating voxel arcade shooter specifically engineered to take you to a happy, tranced-out pleasure zone full of deer and mushrooms.

Back in 1994 we created one of the first examples of a new genre of arcade gaming: the trance shooter, with “Tempest 2000” on the Atari Jaguar.

Since then we have been creating software – both games and visualizers—with the specific intent to create in its users a euphoric experience, something that players will return to again and again simply because the act of playing feels so good.

Memorable milestones along the way include the Virtual Light Machine light synths, the Xbox 360 music visualizer, and games such as Space Giraffe, Gridrunner Revolution, Polybius, and the Minotaur Arcade games.

In recent years we have been bringing these experiences to the world of virtual reality too. Head-mounted displays are in everyone’s future, and we now make everything we create playable in or out of virtual reality as a matter of course. Immersion via a virtual reality headset makes the mood-enhancing, euphoric nature of our games even more effective.

Moose Life is the latest step on our journey into euphoric trance. Created in the style of an 80s arcade game, but in fully immersive 3D / virtual reality. You’ll feel like you are inside the mind of Eugene Jarvis Himself.