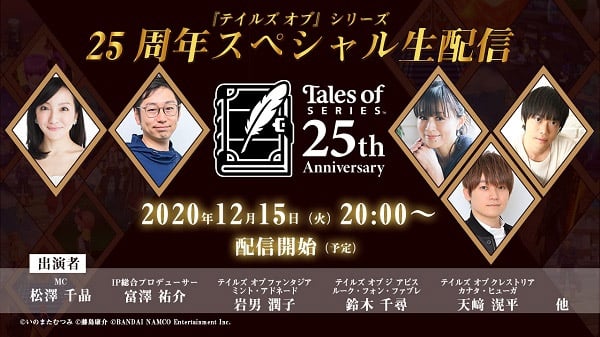 Bandai Namco will host the “Tales of Series 25th Anniversary Special Live Stream” on December 15 at 20:00 JST, the company announced. You will be able to watch it on YouTube and Periscope.

The program will feature the latest information on Tales of series mobile games, events, anniversary merchandise, and more, as well as game development stories and more with creators who have worked the series, plus a special performance by music artists and composers.

The full list of featured presenters is as follows:

The first game in the Tales of series, Tales of Phantasia, launched for Super Famicom on December 15, 1995 in Japan. The latest entry in the series, Tales of Arise, is in development for PlayStation 4, Xbox One, and PC.