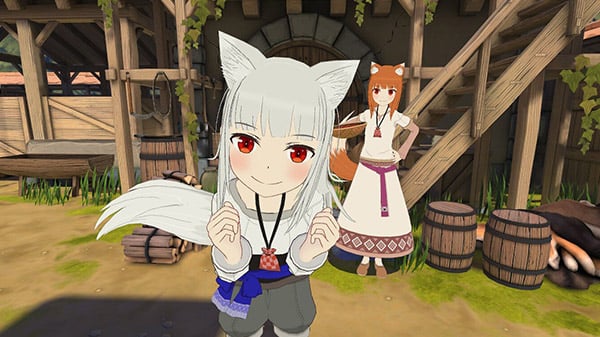 At the end of his journey with the wolf goddess Holo, former traveling merchant Lawrence settled down with her and opened a bathhouse.

The couple was blessed with an adorable daughter and an idyllic life.

However, the beautiful wolves have a weakness for delicious meals and their food expenses are a source of headaches for Lawrence.

One day, as Lawrence is going about his fur side business to further fill the family’s coffers, a slight incident occurs.

To further complicate things, Holo saunters in with quite the feast.

The game has a 30 minute story and a game mode where you can watch part of the anime alongside its characters in the style of Japanese paper street theater.

A peaceful life in the bathhouse with wolfgirls awaits.

You can enjoy the game and view the included anime without a VR headset in its Non-VR Mode.

If you missed it, watch a trailer here.

Deemo Reborn coming to Switch on December 17 Previous post
Psychotic's Colossus Down launches December 16 for Xbox One and PC, in January 2021 for PS4 and Switch Next post