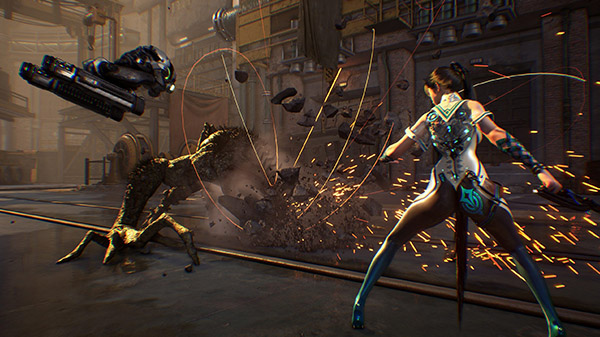 SHIFTUP has released a new set of screenshots and artwork for Project EVE, its upcoming “AAA console game.”

In late November, SHIFTUP released a boss battle gameplay video highlighting the game’s graphics and fast-paced action sequencing. It depicts protagonist Eve in combat against an unknown invader known as a “NA-tive” in efforts to recapture a fallen Earth. Today’s images build on that footage with additional in-game screenshots, character renders, and environmental concept artwork.

SHIFTUP also released 3D sculpture images of the monster NA-tive seen in the footage, highlighting its character creation process. Creature designers first sculpt characters out of clay by hand before converting them into the game, utilizing technologies such as high-density 3D scanning and performance capture, among other techniques.

“Our process of 3D scanning ensures that characters in Project EVE explode with distinct realism,” says SHIFTUP CEO Hyung-Tae Kim in a press release. “We can not wait to share more details about what makes this game especially unique.”

Although initially announced for PlayStation 4, Xbox One, and PC in April 2019, the November gameplay video and updated official website no longer mention specific platforms.