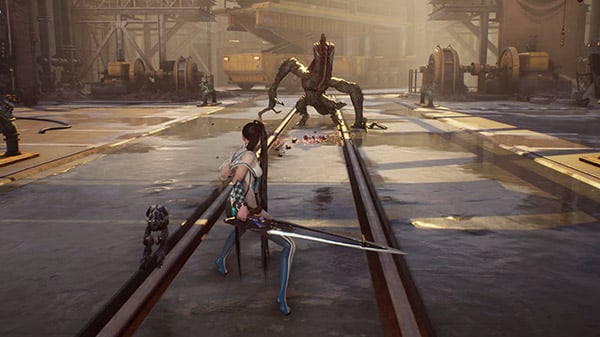 Although previously announced for PlayStation 4, Xbox One, and PC, neither the new gameplay video or updated official website make any mention of the game’s platforms.

Here is an overview of the video and developer, via SHIFT UP:

About the Gameplay Video

The video depicts ‘Eve’ and the battle against unknown invaders, NA-tives, to reclaim the lost Earth after its collapse. Intense battle scenes were realized with overwhelming live-action-grade graphics, showing advanced technology of SHIFT UP since the title’s first trailer video.

SHIFT UP now operates an independent studio for console games, utilizing technology such as high-density 3D scan system and performance capture system. Development is in progress to show maximum performance on various platforms including consoles.

SHIFT UP is a studio with original artwork and strong game development. It was founded in 2013 by Hyung-Tae Kim, an art director and illustrator famous for his successful past works like Blade & Soul and The War of Genesis 3. The studio’s first mobile game, Destiny Child, reached number-one grossing app upon release in 2016 in Korea on both the App Store and Google Play Store, proving the studio’s solid game development and popularity. Since then, it has expanded service areas to Japan and worldwide, stepping up as a global company.

As of 2020, Shift Up is preparing for new projects to follow, Project NIKKE and Project EVE, going beyond mobile games to the domain of console and PC games as a global multi-platform developer.

Watch the footage below. View a new set of screenshots at the gallery. Visit the official website here.