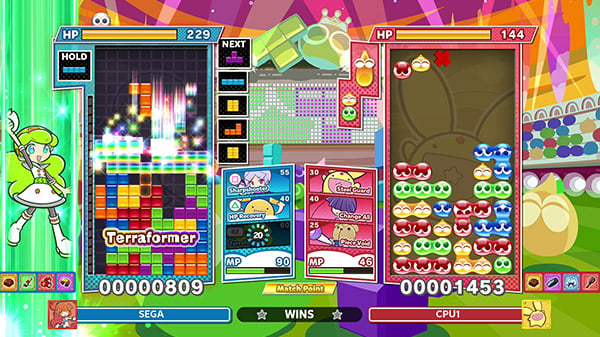 Show Off Your Skills

Each character starts out with a single specialty and learns more powerful skills as you play with them. Selecting characters with complementary skills becomes a key strategy for winning a Skill Battle match. As you play, you’ll pop Puyos and clear Lines, sending Garbage Puyos and Blocks to the other player’s board. When the Garbage falls, your opponent loses HP. If their HP hits 0, you win!!

Puyo Puyo Tetris 2 offers fun for all types of players, including Leagues for experienced gamers and a Free Play mode for fun and casual gameplay.

Building onto Puzzle League from the previous game, three additional Leagues have been added: Tetris League, Puyo Puyo League, and Skill Battle League. These Leagues provide a competitive space where you can match your strategy and talents against other pros and see how you rank amongst the world’s best. Free Play, brought over from Puyo Puyo Tetris, lets you play at a more casual pace with any ruleset and without the pressure of rankings.

Boost your strategy and power your team in Puyo Puyo Tetris 2’s brand-new Skill Battle mode with this pack of rare Item Cards as part of the game’s limited-time Launch Edition—including three special cards featuring items from the Sonic the Hedgehog series!

December 8 is just the beginning of Sega’s plans for Puyo Puyo Tetris 2. After launch, players can look forward to more game features, additional characters, and more! More information will be announced at a later date.

Puyo Puyo Tetris 2 is due out for PlayStation 5, Xbox Series, PlayStation 4, Xbox One, and Switch on December 8, and for PC via Steam in early 2021.