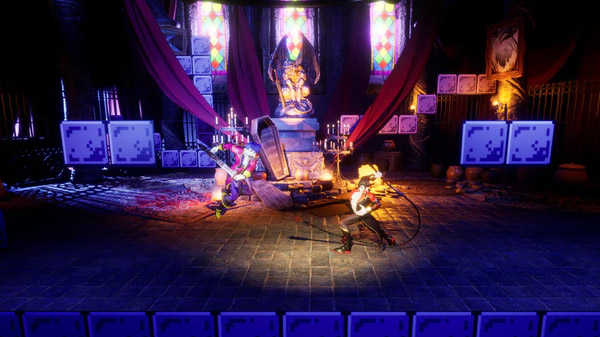 A Kickstarter campaign launched alongside the game’s announcement is seeking $200,000 to fund the game’s development.

Users who support the campaign at the “Let’s Get Physical” pledge level will receive a Limited Run Games-produced physical edition of the game for PlayStation 5, PlayStation 4, or Switch.

Here is an overview of the game, via its Kickstarter campaign:

Romancelvania: BATchelor’s Curse is a visually stunning action RPG that features in-depth weapon and magic based combat, creative and exploration based platforming, and a cast of sexy monsters that you won’t be able to resist.

You play as the legendary playboy vampire himself, Drac, as he slays and lays his way across Transylvania. After being reluctantly recruited by the Grim Reaper to star in a “reality dating show,” he’s on a mission to find the world’s most eligible monsters, get them to move into his party mansion, and restore his former glory by killing everything in his path along the way.