June-announced remasters get a release date.

Ciel nosurge: Requiem for a Lost Star DX and Ar nosurge: Ode to an Unborn Star DX, the June-announced remasters of the Gust-developed adventure and RPG titles, will launch for PlayStation 4, Switch, and PC via Steam on January 28, 2021 in Japan, publisher Koei Tecmo announced in the latest issue of Weekly Famitsu. 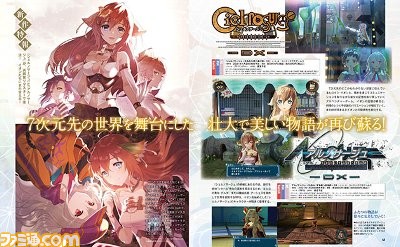 Ciel nosurge was first released for PS Vita in April 2012 in Japan. Ciel nosurge Re:Incarnation, a re-release including all of the original game’s patches and downloadable content up until that point, was released in February 2013; and Ciel nosurge Offline, an offline-only version of the game, followed in October 2014.