An enhanced version of the 2010-released side-scrolling shooter sequel. 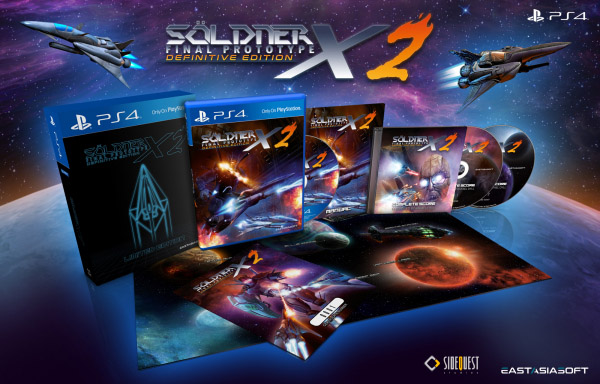 Publisher Eastasiasoft and developer SideQuest Studios have announced Soldner-X 2: Final Prototype Definitive Edition, an enhanced version of the 2010-released side-scrolling shooter for PlayStation 4. It will launch in November with English, French, German, and Japanese language support. A physical limited edition is also planned.

Soldner-X 2: Final Prototype first launched for PlayStation 3 in May 2010 and PS Vita in March 2015.

Here is an overview of the Definitive Edition, via Eastasiasoft:

A side-scrolling shooter sensation returns, bigger and bolder than ever before! Blending traditional arcade gameplay with scorching HD visuals and rocking audio presentation, Soldner-X 2: Final Prototype Definitive Edition is laser-focused on bringing everything the genre is known for into the current generation.

Dynamic score-linked difficulty, a challenge mode that rewards skillful performance with bonus features, devastating limit attacks and a pumping soundtrack are just the beginning. All previous DLC is now included in the base game, replay sharing and online scoreboards support friend lists, weapon and boss effects have been updated, challenge difficulties have been rebalanced, plus there’s a new gallery mode. This is the ultimate realization of Soldner-X 2: Final Prototype, fully revised and reborn!