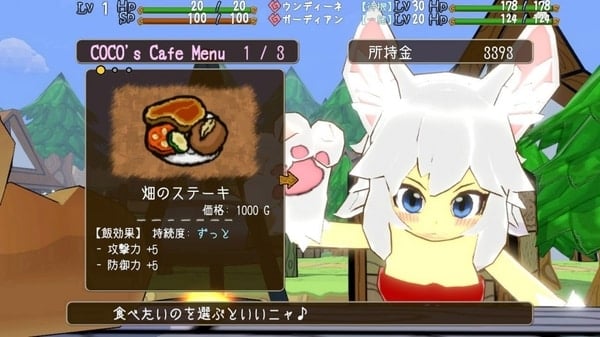 Regista will release a Switch version of Nekotokage-developed roguelike RPG Monster Girls and the Mysterious Adventure via the Nintendo eShop on September 17 in Japan for 2,980 yen. Pre-orders are available now at a 33 percent-off discount price of 1,980 yen.

The Switch version adds Koko, Arakune, and a third mystery character—all three who previously appeared in support roles—as characters you can take on your adventure.

Befriend monster girls and go on adventures together!

This is a Mystery Dungeon-style roguelike game in which the terrain changes with each challenge.

This is a Mystery Dungeon-style roguelike game. When the player makes a move, enemy monsters will also make a move. The game uses a turn-based system. You can befriend the monster girls you meet during your adventures by giving them drinks, ignoring them from time to time, and comparing their strength.

As an adventurer, “you” find yourself in a mysterious ward. According to the monster Tarte, who calls herself the mayor of a nearby village, in order to escape from this ward, you have to defeat the “tower sorcerer” in the Tower of Return.

Defeat the sorcerer and get out safely… Your mysterious adventure is about to begin!