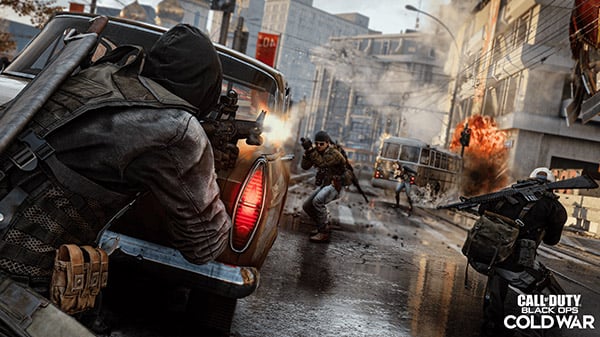 The beta schedule is as follows:

Read more about multiplayer maps, new and returning modes, and the open beta below, via the Activision Blog (2).

There are two weekends of Black Ops Cold War beta content with each “weekend” lasting a total of around five days, scheduled to begin each Thursday morning at 10:00 a.m. PT / 1:00 p.m. ET, with exact timing to be decided.

The first Beta Weekend is exclusively for PlayStation 4 owners, running from Thursday, October 8 to Monday, October 12.

The second beta weekend is for PlayStation 4, Xbox One, and PC owners, starting from Thursday, October 15, and running to Monday, October 19.

If you’re a PlayStation 4 owner, regardless of whether or not you pre-ordered the game, you can resume and continue to play the open beta free for the entire Weekend 2 period.

In Call of Duty: Black Ops Cold War, Treyarch’s signature map design will be rooted in the game’s realistic and historical setting, all accentuated by a visual art style that immerses players into the unfolding early 1980s Cold War narrative.

This Multiplayer journey brings operators around the world from the Angolan desert (Map name: Satellite), to the frozen lakes of Uzbekistan (Crossroads), to the streets of South Beach (Miami), to frigid North Atlantic waters (Armada), and even to the heart of the U.S.S.R. (Moscow). Here’s a quick rundown of some of the maps you can expect to infiltrate into:

While just a sample of the broader array of maps that will be available at launch, these five maps are meticulously designed and based on authentic, real-world sources, as Treyarch’s visual research department visited real-life locations, photo-scanning thousands of physical objects, terrains, environments, and materials.

All those assets aided developer designers and artists to deliver an immersive virtual world that’s rich in ambience, further pushing the visual fidelity of environments through photometric lighting, and the game engine’s “Contour” terrain system. This sets an incredible stage for Multiplayer combat set through a high-dynamic-range true 4K experience on next generation platforms (PS5 and Xbox Series X) and PC.

Call of Duty: Black Ops Cold War’s boots-on-the-ground combat is built upon the familiar feel of Black Ops movement and gunplay, all while innovating on key gameplay elements to bring it to new heights.

It begins with, of course, the weaponry. A new weapon sound engine brings further understanding of enemy and friendly gunfire, giving players a sense of what is being fired at them and where it came from through three-dimensional and directional sound.

For an operator’s own loadouts, the Create-a-Class system is now slot-based, automatically giving them a primary, secondary, lethal and tactical equipment, a Field Upgrade, and a set of Perks.

New to Black Ops, Field Upgrades are in-game items that either help your squad or hinder your enemies, earned solely on time in-game with a cooldown that lasts after death.

Loadouts can also be outfitted with class-changing Wildcards, which can provide one of four benefits:

Those looking to further tinker with their primary weapon, or some secondaries, can head to the Gunsmith. Each primary weapon can be customized with up to 54 attachments across eight different nodes, or attachment points, with at least six options per attach point. The benefits and drawbacks of each attachment are shown via exact percentage change, which allows operators to precisely understand the data behind how each weapon configuration will feel out in the field, along with further conversations between developer and community about weapon tuning.

Outside of Loadouts, Scorestreaks make a return with several significant changes. In this new system, earned score is kept through death, giving all players a chance at earning these visceral and fun tools that can turn the tide of battle.

However, these Scorestreaks, especially higher-end rewards, must still be earned through earning plenty of score via elite gameplay. Those who string together multiple kills before a death will earn streak score bonuses, which can aid significantly in earning the game’s most powerful Scorestreaks.

Scorestreaks also have cooldowns, preventing players from “spamming” Scorestreaks repeatedly, and some even exist to counter other Scorestreaks outside of traditional anti-Scorestreak measures.

With more points of motion and physics effects, operators’ movement will feel more lifelike than ever before. On top of these visual advancements, expect four new refinements in movement to be introduced in Black Ops Cold War:

Black Ops Cold War is set to support cross-platform and cross-generation play as well as cross-progression, breaking ground for the Call of Duty franchise as it introduces the next generation of global combat.

This sense of interconnectedness will be felt across all modes of play and for every available platform including PC, where Beenox is the lead developer. Through Battle.net, PC players can expect major improvements made to the Call of Duty PC experience of the past, along with better monitoring widgets, notifications for performance anomalies, additional gameplay settings, and numerous visual features driven by the latest in software innovations.

The game also ushers in the next evolution of Call of Duty: Warzone, continuing and expanding the blockbuster Battle Royale free-to-play experience. Treyarch, Infinity Ward, and Raven Software, with additional support from other studios, are all collaborating to preserve continuity within Warzone while also incorporating elements of Black Ops Cold War.

For the first time in franchise history, all fans will experience the next generation of global combat as one community, regardless of the platform or console generation on which they play Black Ops Cold War.

With Black Ops Cold War, an entire Multiplayer party could be comprised of up of to five players who are playing the game across the available five platforms, including next and current generation consoles as well as PC.

Alongside cross-platform and cross-generation play, players will have their profile, progression, and statistics tied to their Activision account. This allows them to switch between platforms, if they choose to do so, without losing in-game progress or identity*.

Warzone will continue to evolve after the launch of Call of Duty: Black Ops Cold War, interweaving some of Black Ops Cold War’s themes, weapons, and operators into this blockbuster free-to-play Battle Royale experience.

Call of Duty: Black Ops Cold War is due out for PlayStation 4, Xbox One, and PC via Battle.net on November 13, and for PlayStation 5 and Xbox Series X this holiday. Read more about the game here.

S_Mania999 ⋅ Disney Classic Games Collection: Aladdin, The Lion King, and The Jungle Book announced for PS4, Xbox One, Switch, and PC ⋅ 2 minutes ago