From the developers of Phantom Breaker: Battle Grounds. 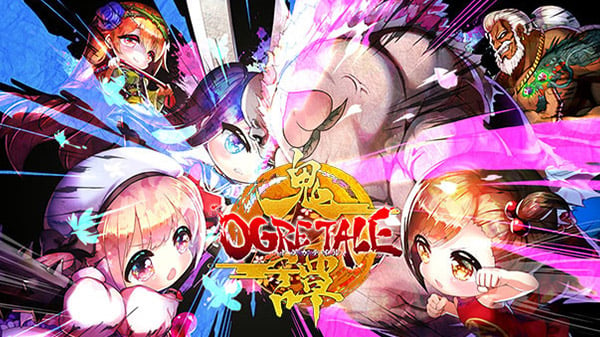 Publisher Degica Games and Phantom Breaker: Battle Grounds developer Mages. have announced Ogre Tale, a cooperative beat ’em up action game set in modern day Japan, for PlayStation 4, Xbox One, Switch, and PC. The PC version will launch via Steam on August 20 for $19.99 / 1,980 yen. Release dates for the console versions have yet to be announced.

Hundreds of years ago, there dwelled ogres alongside humankind. These ogres were known to cause no end of problems for the humans they came upon, leading them to be feared and hated, regarded as monsters and demons.

One day, a trio of soon-to-be folk heroes named Momotaro, Kintaro, and Issuntaro decided enough was enough, and set foot upon the land from whence the ogres came: Onigashima. Their goal was to confront the ogres on their own turf and take them down once and for all… and so they did.

After a long struggle, Momotaro and his crew successfully defeated the leader of the ogres: the beautiful yet dreaded Iroha (CV: Yukari Tamura). And with Iroha’s defeat, the ogres themselves fell to ruin, and peace once again reigned for humanity. Momotaro, Kintaro, and Issuntaro were heralded as heroes, and they all lived happily ever after…

Iroha, having used an ancient technique for reincarnation upon herself just moments before her demise, has lived many lives in many forms. Finally, after nearly giving up hope, she discovers the last surviving ogres: a trio of sisters bearing the name of their ancient homeland, Onigashima. She (or, now, he, as a male cat) raises them as her/his own, strictly teaching them the ways of the sword so that one day, s/he may lead them into battle against Momotaro and reclaim the ogres’ rightful place in society.

And fortunately for them, Momotaro is indeed still out there! Specifically, a guy named Momotaro—who happens to be a 37th generation descendant of the original—just so happens to have been toiling day in and day out as a host in the red light district, and has finally reached his breaking point. He has PLANS now, and suffice it to say, they’re not exactly folk-heroic!

So, hey, this was supposed to just be a petty revenge story, but with Momotaro suddenly turning evil due to systemic depression, maybe the ogres can actually be the good guys this time around! Lucky… them, I guess?

What even IS this story, anyway?!

Select from the three Onigashima sisters and challenge main missions and side missions as the tale progresses, leveling up and earning items and money (to spend on items via online shopping, of course!) that help teach you new skills and toughen your stats for the inevitable face-off against Momotaro! Between each mission, listen to witty and often fourth wall-breaking banter among the girls, their cat guardian Iroha, and a wide variety of villains. This story doesn’t take itself very seriously, and neither should you! Just kick back and enjoy the ride!

Up to three players at once can join the fray in this chaotic frenzy of a mode, wherein a number of enemies not seen anywhere else can be encountered, and a vast fortune can be earned through contiguous beatdowns and massively one-sided fights (I mean, it’s three of you against one boss enemy! OF COURSE you’re going to kick yokai tail!).