But the release date is "just around the corner." 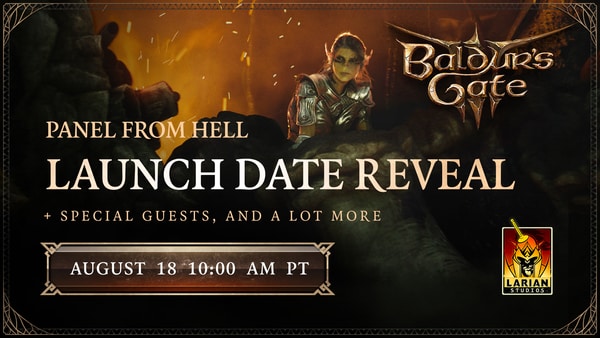 Baldur’s Gate III will not launch in Early Access in August as initially planned, developer Larian Studios announced. But the release date is “just around the corner” and will be announced in a live stream on August 18 at 10:00 a.m. PT / 1:00 p.m. ET. You will be able to watch it on YouTube and Twitch.

Baldur’s Gate III is an entirely next-generation RPG taking place in the Forgotten Realms setting from Dungeons & Dragons and 20 years in the making. Return to the legendary city of Baldur’s Gate in a tale of fellowship and betrayal, sacrifice and survival and the lure of absolute power.

Dark powers are awakening inside you, drawn from a Mind Flayer parasite planted in your mind. Resist, and turn evil against itself. Or embrace corruption, and lay claim to the Forgotten Realms.

You are burdened with a great power devouring you from within. How far down the path of darkness will you let it take you? The fate of the Forgotten Realms is on your party’s shoulders. Will you carry it to salvation, or descend with it to hell?

We are in the Forgotten Realms, a land of many races and multiple divine beings. We know that the world is in turmoil: armies of evil (gnolls, orcs, duergar, goblins, drow, etc.) rampage along the Sword Coast, and refugees swarm to Baldur’s Gate.

Amid all this chaos, a new cult is on the rise: the cult of the Absolute. Seeking to overthrow the old order, its shadowy network is chipping away at the Forgotten Realms foundations. Baldur’s Gate itself will be the first to fall.

That is where we come in: the players. And we’re off to a very inauspicious start indeed…

Out of nowhere, we were kidnapped by mind flayers. A tadpole was put in our heads. We barely survived the crash landing of a nautiloid, and we find ourselves stranded in the middle of an inhospitable wilderness. We discover we have only a few days to get rid of the parasite inside, or we’ll become mind flayers ourselves.

As we desperately seek a cure, we discover the tadpole gives us godlike powers and we find ourselves on the center stage of a complot hatched by none other than the Dead Three: the gods of Murder, Tyranny, and Death.

Our journey will not only take us back to the legendary city of Baldur’s Gate, but through and beyond the Forgotten Realms.

It is a journey of survival: ours, and all of the Forgotten Realms.