Plus Doraemon Story of Seasons for PS4, Hakuoki Shinkai: Ginsei no Shou for Switch, and more. 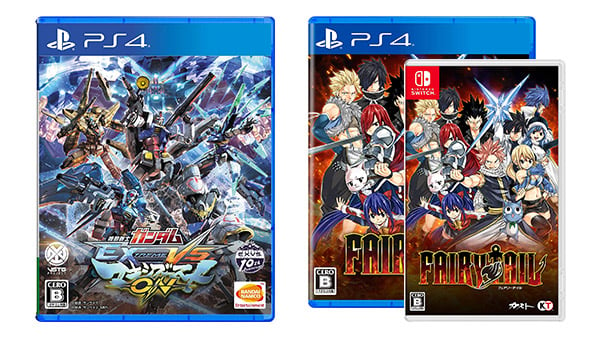 The latest home release of the hit arcade game series, Mobile Suit Gundam Extreme VS. Maxiboost ON is a two-on-two player-versus-player combat game featuring 183 playable Mobile Suits from 36 different Gundam iterations, each with its oqn unique abilities. In addition to online and local competitive modes (including LAN support), the game also features a single-player missions mode, customization elements, and more.

Developed by Atelier series studio Gust, Fairy Tail is a turn-based RPG featuring the “Tenrou Island,” “Grand Magic Games,” and “Tartaros” arcs. It features 16 playable characters, including appearances from various non-“Fairy Tail” guild characters, as well as game-original episodes. Familiar moves such as “Unison Raid” and “Extreme Magic” can also be performed, including game-exclusive Unison Raids. The town of Magnolia and the Fairy Tail guild have also been reproduced. As a guild, you will complete missions from the request board, raise your rank, and aim to become the top guild.

Other new releases this week includes Doraemon Story of Seasons for PlayStation 4, Hakuoki Shinkai: Ginsei no Shou for Switch, and more.